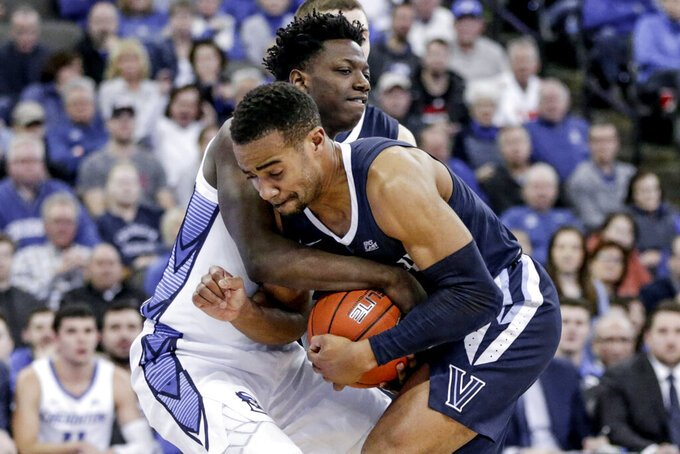 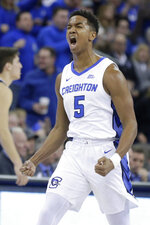 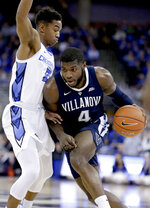 Booth scored 19 of his 28 points after halftime to ignite the Wildcats' surge as they came from behind to beat Creighton 90-78 on Sunday.

"He's got an incredible humility about him where when you need him, he's there," Villanova coach Jay Wright said. "If you don't need him, he's doing all the little things and he's not complaining. It's what makes him a great leader and great player."

Booth made all four of his 3-pointers in the second half and scored eight straight points early in a 26-6 spurt that turned Villanova's 47-38 deficit into a 64-53 lead with 9½ minutes left. The Bluejays had two scoring droughts of more than 4 minutes as Villanova (13-4, 4-0 Big East) pulled away.

The defending champion Wildcats came back from sizeable deficits for the third time in four games. They trailed by 13 before beating No. 24 St. John's on Tuesday and by 14 in a win over DePaul on Jan. 2. Booth hit the go-ahead 3-pointer late and scored 23 points against St. John's.

The fifth-year senior said his work is a reflection of the team.

"It's how resilient we are, how mentally tough we are from being down a lot throughout the season," Booth said. "It's learning how to stay calm and doing what we do to fight back and stay aggressive no matter what happens."

For the Bluejays (10-7, 1-3), the loss came after they twice led by nine and followed their crushing overtime home loss to No. 21 Marquette on Wednesday. In that game, they gave up a Big East-record 53 points to Markus Howard and blew a three-point lead with less than a second left in regulation.

"To beat Villanova, it takes tremendous discipline on both ends of the floor," Creighton coach Greg McDermott said. "I've said on numerous occasions, they just don't beat themselves and they have two of the better players in the league in Booth and Paschall, and they certainly showed that today why they are in that position."

Ty-Shawn Alexander made five 3-pointers and scored 17 of his 22 points in the first half as Creighton got out to a nine-point lead. Villanova clamped down on Alexander in the second half, limiting him to two field goals.

The Bluejays were up nine again early in the second, at 47-38, before Villanova stormed back.

Booth led the Wildcats to their first lead since the opening four minutes after Paschall converted a nice pass in the lane from Gillespie. Booth made three free throws after getting fouled shooting a 3-pointer and then a jumper and 3-pointer to put Villanova up 48-47 with 16:36 left.

The Bluejays got it back to 51-all, but Booth made two straight 3s to open another 13-0 spurt that broke it open again.

Villanova: The Wildcats have won five straight and are the only unbeaten team in Big East play. They played their best half of the season on defense in the second half, limiting up-tempo Creighton to 40-percent shooting and 36 points.

Creighton: The Bluejays, who played without injured starter Damien Jefferson (calf, ankle) have lost three straight Big East games and now have to go on the road for back-to-back games.

"We had a really short bench today," McDermott said, "and there were some matchups that were just awful for us given the guys we have available to us. But I thought they fought and competed. Today we got beat by a better team."

"We could be sitting here 7-10 and waiting for those guys, but Phil and E have carried us," Wright said. "Now Jermaine is starting to prove (himself), Quinerly gave us great minutes, Saddiq is starting to get better. It's what we need if we're going to be a good team. Phil and E can't carry us the whole season. They'll get worn down. But the younger guys are starting to come and that's what we're going to have to have to get road wins and beat teams like Creighton."