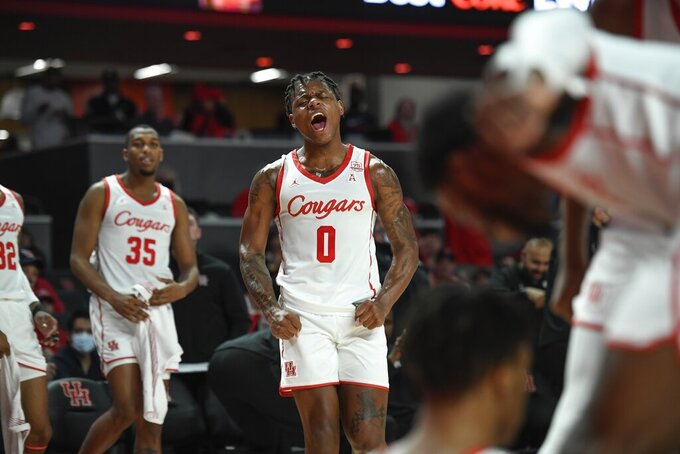 Houston guard Marcus Sasser (0) react to a foul called against Texas State during the first half of an NCAA college basketball game Wednesday, Dec. 22, 2021, in Houston. (AP Photo/Justin Rex)

Marcus Sasser had 13 points and Jamal Shead finished with 12 points and 10 assists for Houston (11-2). The Cougars shot 55%, including 13 of 28 on 3-pointers, in winning for the seventh time in eight games.

Houston coach Kelvin Sampson said the game plan was to use Carlton’s size in the low post and take advantage of the mismatch.

Houston, which has won 33 straight home games, outrebounded the Bobcats 31-26 and held a 36-16 advantage in the paint.

“These kinds of games is what our culture is all about,” Sampson said. “We get these games before Christmas, the kids are looking forward to the break and they don’t focus on taking care of business or the matter at hand. … I just loved the way we prepared Monday and Tuesday. We had a great film session last night. We had tremendous prep today.”

Shelby Adams scored 10 points, Nighael Ceaser added nine and Isiah Small had eight for Texas State (9-3), which had won eight in a row. The Bobcats shot 40% and were held to a season low in points.

“Certainly, them with their size disrupted our flow, and then, we haven’t traditionally shot the ball well here in recent years,” Texas State coach Terrence Johnson said. “Tonight was no different.”

Houston, which never trailed, used a 17-2 run over a five-minute span of the first half to take a 29-10 lead on a 3-pointer by Shead with eight minutes left. Shead and Sasser each had six points in the spurt.

Houston led 45-22 at halftime behind 14 points from Carlton.

“When you play against a team like Houston, physicality is going to weigh on you a little bit,” Johnson said. “We tried to come out and be a little bit aggressive. They did a really good job of making adjustments. One of the key components of the game was their ability to score the ball on the low block early on, and that opened up 3-pointers.”

Texas State: The Bobcats could not match up with Houston’s size and presence in the paint. Texas State came out fast in both halves but could not maintain the pace. … The Bobcats got 21 points from their bench.

Houston: The Cougars won their fourth straight over Texas State and improved to 10-0 in Houston against the Bobcats. … Houston forced Texas State into 19 turnovers, which the Cougars turned into 23 points. Houston committed eight turnovers. … Edwards left midway through the second half with a sprained ankle, Sampson said.

Houston sophomore guard Tramon Mark underwent left shoulder surgery and will sit out the remainder of the season as he recovers, the school announced. Mark, who has been a key reserve for the Cougars, averaged 10 points in seven games this season.