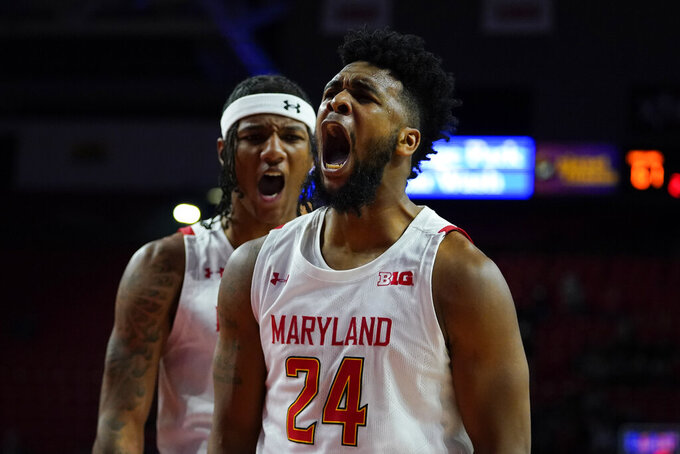 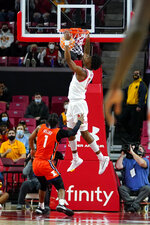 The Illini found out how difficult that might be when Donta Scott and Maryland dominated the paint.

Scott scored a career-high 25 points, and the Terrapins beat the Illini 81-65 on Friday night with Cockburn sidelined because of a concussion. With the star Illinois big man unavailable, the Terps enjoyed a 40-16 scoring advantage in the paint and 21-8 on free throws.

“We emphasize that every game. It doesn't matter who we're playing,” Maryland interim coach Danny Manning said. “We want paint touches. We want to be the first team to the bonus.”

The Illini (13-5, 6-2 Big Ten) lost for the second consecutive game after winning six straight. It was a much-needed victory for Maryland, which has struggled all season and already went through a coaching change when Mark Turgeon exited in early December.

Alfonso Plummer scored 18 points for Illinois, which was coming off a double-overtime loss to No. 4 Purdue on Monday night. The Illini got Andre Curbelo back in that game after he'd been out since November with his own concussion-related issues. Then they had to face Maryland (10-9, 2-6) without Cockburn.

Coach Brad Underwood didn't have any specific timetable for Cockburn's return, but he seemed to understand it could be a little while.

“You've got to be very careful how many changes you make because you don't have a guy, for what may be a short or a long period of time. I don't know,” Underwood said. “We thought Curbelo's was going to be a quick period of time, and it's nine weeks later.”

Illinois has not won at Maryland since 2011. The Terps are 4-0 at home against the Illini since joining the Big Ten.

The Illini led 56-52 before Maryland took the lead with a 12-2 run. Scott capped that stretch with a layup and a three-point play.

Fatts Russell had 15 points for the Terps and Qudus Wahab added 11.

Illinois: The Illini can't seem to get all their top players on the court for very long. They lost to Marquette earlier this season without Cockburn, and their inability to beat a Maryland team near the bottom of the conference standings showed how valuable he is.

Maryland: The Terrapins have taken their lumps under Manning, but they deserved this win, and an 11-0 run to finish the game felt a bit cathartic for the home crowd.

Scott was out of the starting lineup for the first time this season.

“Just across the board, it's our job as a staff to challenge our guys to not only do well off the court, as well as on the court,” Manning said.

“The thoughts that I had going through my head was just, use my strength and my height,” Scott said.

“The trainer told me he's got a fever. Kid can't catch a break," Underwood said. “It was 100.6 or something fever-wise, had body aches. Said he would try to go, but I made my mind up pretty quick, everything he's been through, that I wasn't going to try to put him out there and stress him too much.”

Illinois: The Illini host No. 14 Michigan State on Tuesday night.