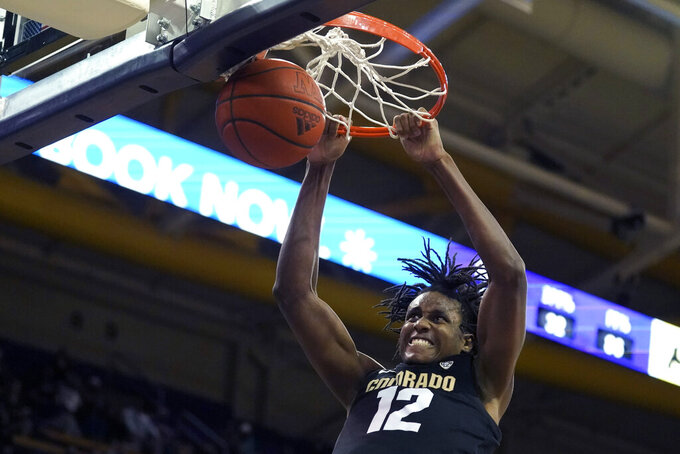 Jabari Walker's potential has always been what catches people's eye. An athletic 6-foot-9, the Colorado sophomore can do things few people his size can.

Walker is also still learning the college game, so his flashes of brilliance sometimes come with doses of reality.

“This year, his role is completely different. The ball is in his hands," Colorado coach Tad Boyle said. "We’re expecting him to make plays for himself and for others. He’s capable, but he’s on a learning curve.”

Walker arrived at Colorado as a four-star recruit and had a solid freshman season, averaging 7.5 points and 4.3 rebounds in 26 games as a backup.

Boyle needed him to fill a bigger role this season with such a young team and Walker has produced, averaging 13.8 points and 8.5 rebounds.

But with more responsibility comes more opportunity for weaknesses to be exposed.

A superb 3-point shooter last season, Walker hasn't found the range quite as well this season as teams have focused more on stopping him, his shooting percentage dropping from 52 to 23.

A good ballhandler for his size, he has struggled with turnovers at times, including a crucial one late in a loss to Southern California.

“It’s not because Jabari’s not talented enough and he’s not trying to do the right things," Boyle said.

It's been a learning curve, but the eye-catching plays and potential Walker has shown tends to straighten it out in the eyes of scouts.

STRENGTHS: Good perimeter shooter, even if the 3s haven't been falling this season. Walker's length allows him to shoot over smaller defenders and, combined with his athleticism, provides a big upside defensively. The son of former NBA player Samaki Walker, he also has a high basketball IQ.

WEAKNESSES: Needs to work on court vision and playmaking — he has 30 turnovers and 15 assists this season. Could improve on ballhandling skills and needs to avoid foul trouble.

Other prospects around the Pac-12:

JAIME JAQUEZ, UCLA. The 6-7 junior is a crafty low-post scorer who has great footwork and a variety of up-fakes to get off shots from multiple angles. Jaquez is also an excellent outside shooter and a physical player who won't back down defensively.

HARRISON INGRAM, STANFORD. A 6-7 forward, Ingram is a good playmaker, solid rebounder and shooter. He's averaging 11.3 points and 6.7 rebounds per game as a freshman.

CHRISTIAN KOLOKO, ARIZONA. Once a rail-thin 7-foot freshman, Koloko has added heft and developed his offensive game as a junior. He's 10th nationally with 3.2 blocked shots per game, leads the Wildcats with 7.5 rebounds and averages 13 points per game.