Dante leads Oregon past Washington State in 2nd half 74-60 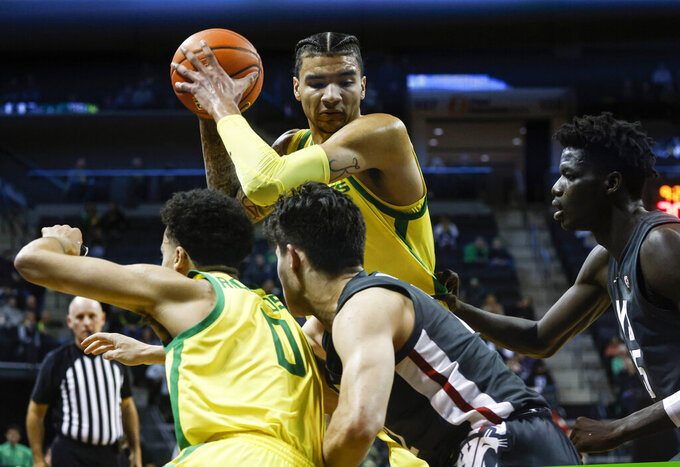 EUGENE, Ore. (AP) — N'Faly Dante scored 16 of his 22 points in the second half when Oregon used a 13-2 run to jump start a 74-60 win over Washington State in the Pac-12 Conference opener on Thursday night.

The game was played within four points through the first 26 minutes. TJ Bamba had a dunk and a three-point play to put the Cougars on top 44-40. Will Richardson got those points back in similar fashion, and after one last Washington State lead, the Ducks scored eight straight points. A Dante layup gave the Ducks a 53-46 lead with 11:08 to play.

Starting near the five-minute mark, Dante scored three quick baskets, the last two dunks, and the score was 68-54. The Cougars went six minutes without a basket, missing five shots with four turnovers.

Richardson had 17 points for the Ducks (4-4) and Quincy Guerrier 12. Richardson had eight assists and three steals and Dante had seven rebounds.

Mouhamed Gueye scored 19 points for Washington State (4-4), which came in averaging 11 3-pointers but finished 3 of 14 behind the arc. Bamba added 14 points, but he missed his only 3, coming in at 56.5%. Jabe Mullins, a 57% shooter from distance, missed the game with a knee issue.

The first half ended deadlocked at 32 with nine ties and five lead changes. Almost every statistic was a tie, but Gueye poured in 17 points for Washington State on 7-of-9 shooting. No other Cougar had more than four points.

Gueye only got three shots in the second half while Dante was 8 of 10 for the Ducks.

Washington State heads home for a Sunday game against Utah, which knocked off No. 4 Arizona on Thursday. Oregon goes to No. 21 UCLA on Sunday.