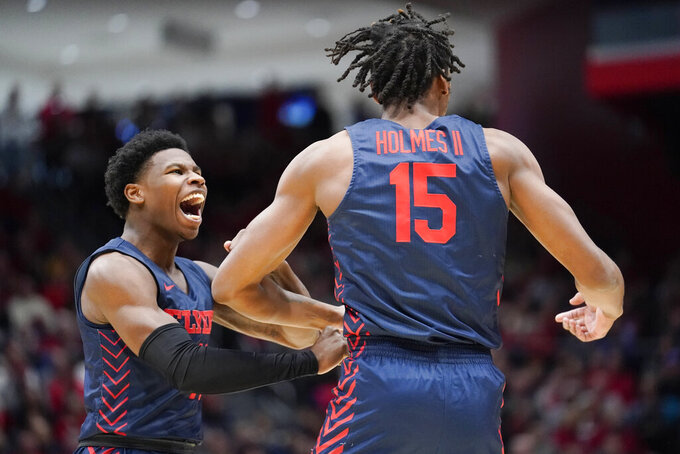 Dayton guard Malachi Smith (11) celebrates after Dayton forward DaRon Holmes II (15) drew a foul after a basket during the first half of an NCAA college basketball game against Robert Morris, Saturday, Nov. 19, 2022, in Dayton, Ohio. (AP Photo/Joshua A. Bickel) 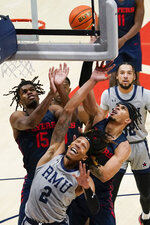 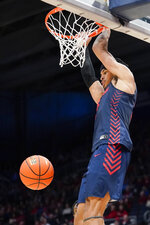 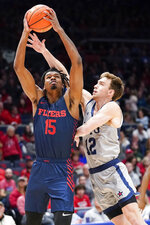 DAYTON (AP) — DaRon Holmes II scored 18 points and No. 21 Dayton shook off a loss at unranked UNLV with a 60-51 victory over cold-shooting Robert Morris on Saturday.

“I think the story of the game was our defense,” Dayton coach Anthony Grant said. “We set the tone early and were able to build a lead. For the first 12-13 minutes, we were really good. Then we got out of rhythm offensively. We had a lull. One of our strengths has to be that we maintain consistency. They attacked our man-to-man, so we switched to a zone. I think, down the stretch, our defense carried us.

“When you have a low level of consistency but your defense is in position, you have a good chance to win every night."

The Colonials pulled to within six, 41-35, on Corbin’s 3-pointer with 12:41 left in the game, but Dayton regained command with a 7-0 run that started with back-to-back dunks by Toumani Camara and Holmes before Amzil connected on a 3-pointer with 7:59 remaining.

Camara finished with 11 points and 14 rebounds.

Amzil and Holmes were a combined 12 of 16 from the field in a game the Flyers led the entire way.

The Colonials missed 13 of their first 16 shots, helping Dayton lead by as many as 15 points, 24-9, with 7:35 left in the first half. Holmes capped a 15-2 run with five straight points on a breakaway dunk off a Robert Morris turnover and a 3-pointer.

Dayton then went cold, missing eight straight shots, including six 3-pointers. That allowed the Colonials to creep within six points twice before halftime before Amzil sank a 3-pointer for a 30-21 halftime lead.

“That's something we have to remember,” Amzil said. “That was a bad performance, but at the same time, we had to put it out of our minds and forget that. Good thing we didn't have much time to think about it.”

Dayton's Malachi Smith said he felt more nervous than rusty after going 2 of 8 overall and 0 of 2 on 3-pointers in his first game of the season. Smith had been sidelined with a right ankle injury. He finished with five points and three steals.

Robert Morris: The game was the first of seven straight for the Colonials away from home, including four true road games and three at neutral sites. They don’t play at home until Dec. 10.

Robert Morris: The Colonials travel to Savannah, Georgia, to face Mercer in the Hostilo Hoops Community Classic on Friday.

Dayton: The Flyers face Wisconsin on Wednesday at the Bad Boy Mowers Battle4Atlantis in the Bahamas.