Durham hits clutch 3 to send No. 11 Providence past Butler 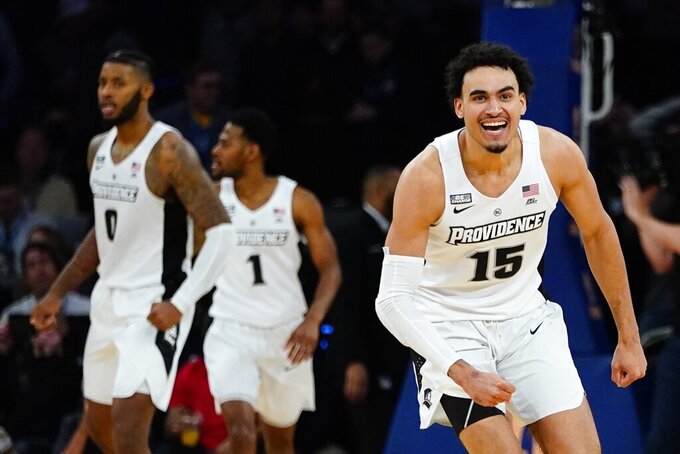 NEW YORK (AP) — Al Durham has made plenty of big shots for Providence this season — at the foul line. He was about the last guy anyone would expect to sink a critical 3-pointer.

That's just how this charmed season has played out for the 11th-ranked Friars.

Durham drained a go-ahead 3 with 41 seconds left for his first basket of the game, and Providence barely got past pesky Butler 65-61 in the Big East Tournament quarterfinals Thursday.

“It was a little rough there for a second,” Durham said. “But, like you said, the last shot went in.”

Nate Watson scored a season-high 26 points for the top-seeded Friars (25-4), who avoided an early exit at Madison Square Garden after winning the first regular-season conference championship in school history.

Jared Bynum, the league’s sixth man of the year, added 16 points off the bench and defensive specialist Justin Minaya made two huge blocks as Providence advanced to the Big East semifinals for the first time since 2018 and fifth since the 2013-14 realignment.

“We didn't do a lot of things great but we did enough to win,” said Ed Cooley, the Big East coach of the year. “And I think today was a microcosm of the type of season we're having.”

The gritty Friars, playing for the first time in nine days, improved to 11-2 in games decided by five points or fewer. They will face No. 4 seed Creighton, a 74-63 winner over fifth-seeded Marquette, in the opener of Friday night's doubleheader.

“Wasn't pretty out there. We definitely showed some rust,” Cooley said. “I think a lot of that credit goes to the way Butler defended us. But just like the season has gone, I guess we saved our best for last."

Chuck Harris had 14 points and Bryce Golden scored all 13 of his points in the second half for the ninth-seeded Bulldogs (14-19), who rallied late to beat No. 8 seed Xavier in overtime in the first round Wednesday.

Bo Hodges added 10 points and a career-best 15 rebounds. Butler, however, finished 3 for 19 from 3-point range and shot 36% overall.

“You know, it's March, so the ball bounces one way or the other,” coach LaVall Jordan said. “A lot of credit to Providence. They've been doing this all year in close games. They've had guys that have made the shot or made the play. They've been surviving and advancing way beyond now. But proud of our guys for the effort and the fight.”

In the first of four sold-out quarterfinals, a boisterous crowd was decidedly in Providence's favor.

The score was tied 55-all late in a back-and-forth second half before Simas Lukosius sank two free throws and Golden made a layup to give the Bulldogs a three-point lead with 2:38 left.

Watson snagged a loose ball out of the air, dropped in a layup and drew a foul with 1:20 remaining. But he missed the free throw that could have tied it.

Minaya blocked a shot by Harris and the ball went out of bounds to Providence. A.J. Reeves found Durham in the left corner and the Indiana transfer knocked down a clutch 3 that gave the Friars a 61-59 lead and left him 1 for 8 from the field.

“I would laugh at that, too,” Cooley said. “But you know what? He made it. And I trust him. He's made some big shots for us the whole time.”

Cooley has called Durham his “closer” because of the lefty guard's proficiency at the foul line — especially down the stretch. He began the week leading the Big East with 153 made free throws.

Minaya came up with another huge block at the other end flying off the weakside and Hodges missed a contested layup. Bynum hit a pair of free throws with 12.9 seconds to go before Hodges scored quickly on a drive.

Providence had trouble getting the ball inbounds cleanly, but Bynum finally secured it and passed to a wide-open Durham for a dunk at the buzzer.

Golden made four straight layups, two on smooth passes from Lukosius, to account for all the points in an 8-0 run that gave Butler a 51-45 lead with 9:13 to play.

“I just try to play with a will,” Golden said. “I knew this could be our last game. And I was just trying to give it everything I had for for the dudes that don't get any college experience after this.”

“Nate was a monster the whole night," Cooley said.

Butler: A disappointing season ended with a heartbreaking defeat for the Bulldogs, but they certainly were a tough out in New York. Butler led for more than 21 minutes in a game that featured 11 ties and 12 lead changes. Since joining the Big East in 2013-14, their only appearance in the tournament semifinals came in 2018.

Providence: A founding member of the league in 1979, the Friars are seeking their third Big East Tournament title (1994, 2014).

Providence clinched the Big East regular-season crown with a 72-51 win over Creighton at home on Feb. 26 in their only meeting. The other one was canceled because of COVID-19 protocols.