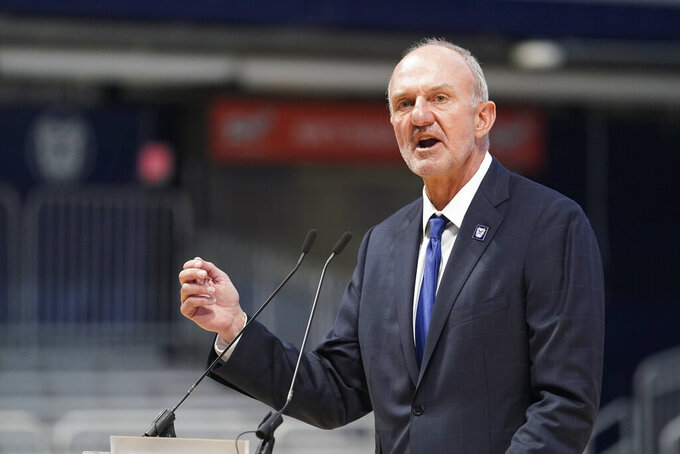 “I had a lot of boxes that I wanted to check,” Matta said in a statement released by the athletic department. “I was looking for strong all-around coaches with a focus on player development, recruiting ties and the ability to build relationships with our team. All three have familiarity with Butler or the Big East and each value winning the right way.”

Pegues helped the Cardinals finish a tumultuous season that included the ouster of Chris Mack in late January. Pegues spent six seasons on Mack's staff at Xavier before following Mack to Louisville after the 2017-18 season.

He also could help if the health issues return that forced Matta to resign at Ohio State in June 2017.

The 54-year-old Matta was hired for his second stint as Butler's head coach April 3 and during his introductory news conference, Matta said he's feeling better after taking a four-year break before returning last season as a non-bench coach at Indiana.

Kuwik worked for two seasons with Matta at Ohio State and one season under Brad Stevens at Butler. He's been coaching for more than two decades with previous stops coming at Dayton and Davidson, where he spent the past five seasons.

Ragland was hired by Matta's predecessor, LaVall Jordan, last April and also has worked at Utah State, Valparaiso, Northern Kentucky, Bowling Green and Indiana State. He was the head coach for two seasons at Vincennes, a junior college in southwestern Indiana.

Jordan was fired April 1 after posting back-to-back losing records. It's only the second time Butler has fired a men's basketball coach in nearly a century.