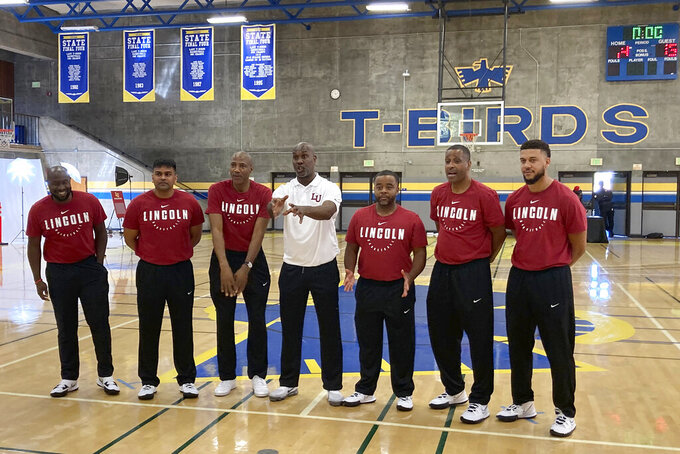 Lincoln head coach Gary Payton, middle, gestures while posing for photos with the other coaches, Wednesday, Sept. 29, 2021, in Oakland, Calif. Hall of Famer Payton is the new men's basketball coach at Lincoln University, determined to make a lasting mark in his hometown. (AP Photo/Janie McCauley)

OAKLAND, Calif. (AP) — Way up in the Oakland Hills, Gary Payton is hollering good-naturedly as if he's still on the court during his days as a dynamic point guard with the Seattle SuperSonics, this time instructing his Lincoln University assistant coaches exactly where to stand for a group photo and moving them into position just so.

“Coach, the other way,” he orders Lester Conner on his right, adjusting him by the shoulders before looking to CJ Ashford on his left and commanding, “You turn this way.”

Payton even throws both hands up almost as if “The Glove” is playing his signature smothering, lockdown defense again.

The 53-year-old Payton is the new men’s basketball coach at Lincoln, which has launched collegiate athletics for the first time in its 101-year history, and he is determined to make a lasting impression on the young players at the small school in his hometown of Oakland. There’s guard Jairren Lillard, the younger brother of Portland Trail Blazers star Damian Lillard. And another guard named Isaiah Attles, the grandson of Golden State Warriors Hall of Famer Al Attles. Payton's son, Julian, too.

“His presence is strongly felt in any room he steps in,” the younger Lillard said. “With him stepping in the room with us young men and having to take that on, it’s different, because a lot of us came from a program where we weren’t really coached. They threw a ball out to you and just said ‘play ball.’ With him, there’s going to be structure. He’s going teach you not only on the court how to be a man but off the court how to be a man, and he’s just a good role model for all of us to have in our life at this time.”

They are here for an opportunity to leave a mark on basketball-crazed Oakland with a leader in Payton who knows how much his mere presence guiding this team could mean to a city that has seen two professional franchises leave recently and another exploring its options to depart. The Warriors relocated to San Francisco, the Raiders from Oakland to Las Vegas and the Athletics are pursuing possibilities in Las Vegas if they can't build a new ballpark here.

“It's the only reason I took this job, is that I can bring something back to Oakland, California,” said Payton, who wrapped up his Hall of Fame NBA career in 2007. “And I can bring a lot of players from this Bay Area and let them see that we've still got a lot of basketball players that's good around here. These young kids, they don't know how to play basketball right now but they will get it.”

Most are upperclassmen transfers seeking a fresh start with a handful of freshmen. Isaiah Attles already played at Contra Costa College and Alcorn State.

“The support we have from Gary and our other coaches and having the support from Oakland as it is being able to go to school out here and not have to go somewhere further that's out of the Bay Area, it's just a blessing,” Attles said. “Couldn't ask for anything more. We're in a good position to succeed. It's all on us now.”

Lincoln is located downtown but the Oaklanders practice in a gym at Merritt College and will play home games at the Warriors' former home arena. The team is an independent without a conference or NCAA affiliation, playing mostly Division II opponents during the initial season.

“It's another opportunity for kids in Oakland," said Warriors guard Juan Toscano-Anderson, who grew up in the city. “Obviously, Gary is a Hall of Famer, Oakland legend and I think the kids will respect that. Everybody in the basketball community in Oakland admires Gary. He knows what he's talking about, he knows what he's doing, so I'm excited to see what happens up there. It's just another opportunity for kids in Oakland to follow their dreams. If it's not with basketball, opportunities in the classroom around the game. Hopefully, it goes well.”

“We have such a deeply rooted connection with Oakland, so I think that’s cool that Gary is there coaching and that the great tradition of Oakland basketball kind of continues and carries on with him leading his own team and also with those Warrior connections," Kerr said. "That’s exciting. I’m going to have to check it out.”

Payton is counting on a packed house when Lincoln plays at Seattle Pacific on Saturday. The team opens Wednesday at Western Washington then faces Central Washington two days later.

No matter the early results, Payton's players will be disciplined. He figures if he can build fundamentally sound athletes committed to learning and making big strides, the program will gain steam and grow. And, he hopes, eventually attract not only top recruits but nationally ranked opponents.

“Well, I’m not going to tell you about the way I’m going about it, but it's kind of tough,” Payton said with a big grin and chuckle. “And my kids are understanding. I’ve got a good group of kids. They know I’m a no-nonsense coach, I don’t take that. I don’t take all the craziness. I’m very strict, and once you put it into them and they buy in, they have to buy into what’s going on, and when they buy in they get the results.”

By Dave Skretta 60 minutes ago
By Hank Kurz Jr. 3 hrs ago
14 hrs ago
By Anthony Anderson 15 hrs ago
By Michael Marot 15 hrs ago