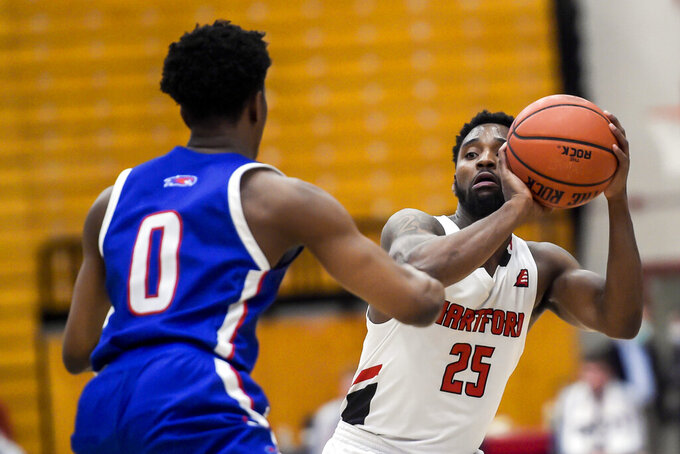 Hartford's Traci Carter (25) looks down court to pass the ball as UMass-Lowell's Ron Mitchell defends during an NCAA college basketball game in the championship of the America East conference tournament Saturday, March 13, 2021, in Hartford, Conn. (Kassi Jackson/Hartford Courant via AP)

Fourth-seeded Hartford was in the title game for the second straight season after last year's contest against Vermont was canceled due to COVID-19. The Hawks upset the second-seeded Catamounts this year in the semifinals to make it the first time in tournament history the title game didn't include either of the top two seeds.

Sixth-seeded UMass Lowell won its first-ever Division I postseason game in the opening round and also knocked off top-seeded UMBC in the semis when Connor Withers matched a tournament record with nine 3-pointers.

After a slow 30 minutes, with Hartford leading 39-37, the Hawks went on an 18-4 run to build a 16-point lead. Hunter Marks scored seven points during the run, and the River Hawks went without a field goal for 6:29.

“Eleven years ago, I got this and I said ‘Let the dream begin,'" Hartford coach John Gallagher said. "There were a lot of nightmares to get to this point. So many people to thank but this program, this neighborhood that we built, is so special. To put it into words is really hard. But we're dancing.”