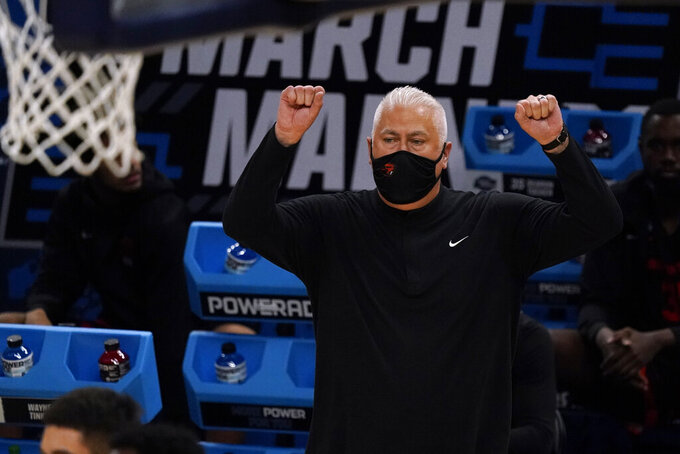 INDIANAPOLIS (AP) — The formula has been simple all year for Houston under Kelvin Sampson: play with toughness, get after teams defensively and go to work on the glass.

It has carried the Cougars within a win of the Final Four — and it's working pretty well for Wayne Tinkle's Oregon State squad in its surprise NCAA Tournament run, too.

Decades have passed since the second-seeded Cougars or 12th-seeded Beavers last reached the national semifinals — or made it anywhere close, for that matter. But their meeting Monday night in the Midwest Region will send one team through to the tournament's final weekend, and both should rely on a similar defensive-minded approach considering how their tournament success has come so far.

“We know how good Oregon State is," Sampson said Sunday. “So we're going to have to play good. They're a lot more like us in that they get on the boards with athleticism and they play physical — should be a very good ballgame. We're looking forward to it.”

It's no major surprise to see Houston (27-3) emerging from the bottom half of the Midwest bracket, securing the program's first trip to a regional final since 1984 amid the famed “Phi Slama Jama” era. The Cougars joined No. 1 overall seed Gonzaga and region top seed Illinois as the only teams in the top 10 of KenPom's adjusted offensive and defensive efficiency rankings entering Sunday.

Yet little else went to plan in the Midwest.

Loyola Chicago took down the Illini.

And most surprisingly, there are the Beavers (20-12), still alive with a chance to become the lowest-seeded team ever to reach a Final Four.

The same team that was picked to finish last in the Pac-12, then lost at home to a Portland team that finished at No. 327 in the NET, has won six straight games. That included a run through the league tournament to secure an NCAA bid unlikely to come otherwise. In the tournament for just the second time since 1990, Oregon State is now chasing its first trip to the national semifinals since 1963.

And much like with Houston, they've won three NCAA games primarily through defense and rebounding (plus-27 in the tournament).

“You look at the games we've won, we've answered some pretty good runs from the opponents and we're playing really good D,” Tinkle said. "And at times, if we're a little insecure with the ball, we're not making shots, defense is what's been keeping us in it.

"When you mention that to the guys, to defend, to get stops, I think it kind of keeps them from getting too caught up in the moment. And they've done a good job of that.”

Oregon State has held Tennessee, Oklahoma State with potential No. 1 overall NBA draft pick Cade Cunningham, and Loyola Chicago to 61 points per game on 31% shooting, including 23% (18 of 78) from 3-point range. They also were successful throwing out different looks, from man to a 1-3-1 zone defense, in Saturday's win against the Ramblers.

Tinkle has pointed to the implementation of a drill as a catalyst for defensive improvement.

“It's a 4-on-4 drill, and we rotate and basically what you do is you can't allow the offensive player to penetrate,” junior Warith Alatishe said. "You have to get in your gaps and help out your teammates. So I think over time, just continuously doing that drill has gotten our chemistry up.

“We know that if we get beat, our teammate has our back.”

As for the Cougars, they entered Saturday night's game against Syracuse and hot-shooting Buddy Boeheim allowing a national-low 37.3% shooting. They held the Orange to 28% while locking down on “Buddy Buckets," who finished with 12 points after averaging 28 over his last four games.

Houston has held three tournament opponents to 60 or fewer points while outrebounding each team by at least nine. That included Syracuse finishing with 46 points, its lowest output in any NCAA Tournament game.

Now the Cougars are preparing to face a fourth double-digit seed in as many games to play for a Final Four berth. Tenth-seeded Rutgers was the highest-seeded team beaten by the Cougars so far.

Not that it matters to DeJon Jarreau, the American Athletic Conference defensive player of the year who led the defensive effort on Boeheim.

“You never know how it's going to go,” Jarreau said of the bracket. “I'm grateful for us to be in this position. We just control what we can control. That's not our problem. But like I said, we're grateful."