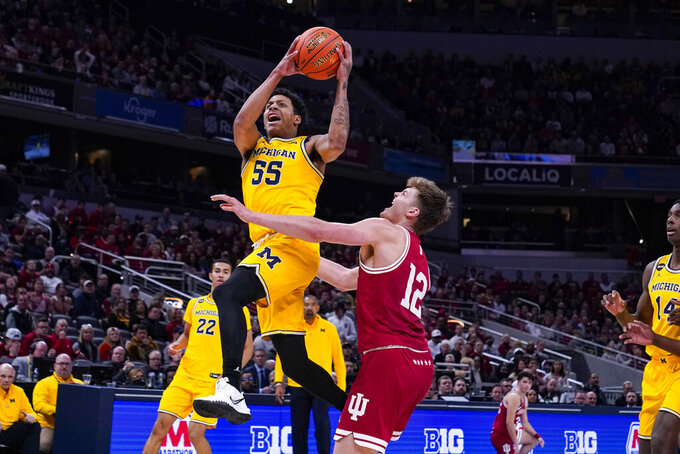 INDIANAPOLIS (AP) — Trayce Jackson-Davis scored 19 of his 24 points in the second half, Xavier Johnson had 17 points, eight rebounds and seven assists and No. 9 seed Indiana closed on a 31-9 run to rally past eighth-seeded Michigan 74-69 on Thursday in the second round of the Big Ten Conference tournament.

Michigan led by 17 points on an Eli Brooks basket with 12:52 remaining but the Wolverines would not make another field goal until the 1:42 mark.

Jackson-Davis made two free throws with 5:39 remaining in the second half to give Indiana its first lead, 63-62, since it was 7-6 with 15:50 remaining before halftime. The free throws capped a 20-2 run that saw Jackson-Davis throw down two momentum-changing dunks on back-to-back possessions, off nice assists from Trey Galloway and Johnson.

After Michigan missed its 13th straight shot, Jackson-Davis scored in traffic in the lane for a 71-64 lead with 1:53 left. DeVante’ Jones ended Michigan’s slide with a runner in the lane and Brooks added a 3-pointer in transition two possessions later to pull within 71-69.

Michigan forced Indiana into a tough contested shot and got the defensive rebound but threw it out of bounds with 10.9 seconds left. It was Michigan’s 10th turnover of the second half. Johnson was fouled and made two free throws for a 73-69 lead.

Indiana (19-12) advances to play top-seeded Illinois in the quarterfinals on Friday.

Jones scored 18 points for Michigan (17-14), which had its 14-game winning streak in the opening game of the Big Ten tournament snapped. Brooks added 17 points and Hunter Dickinson scored 13 of his 15 in the first half.

Michigan went on an early 17-3 run to build a 21-10 lead as Indiana made just four of its first 16 shots. The Wolverines led 41-28 at halftime with a 23-14 edge on the glass and 11-2 advantage at the free-throw line. Dickinson and Jones combed for 25 first-half points, nearly outscoring the Hoosiers.