Jackson-Davis leads No. 12 Indiana in rout of Miami (Ohio) 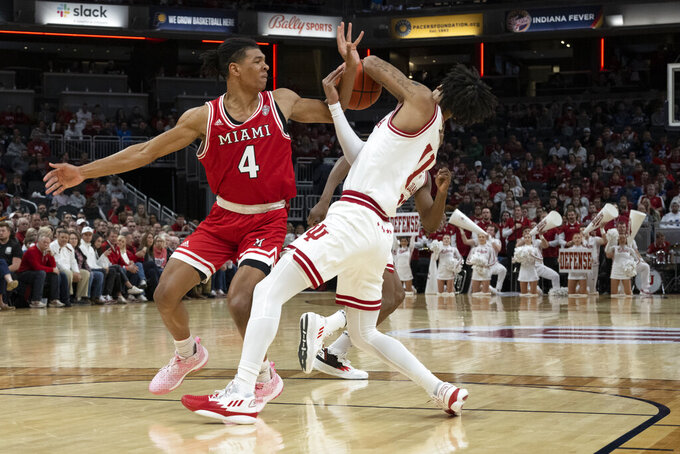 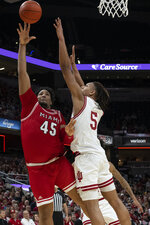 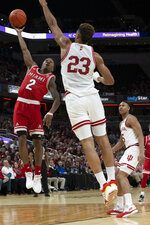 INDIANAPOLIS (AP) — Senior All-American center Trayce Jackson-Davis scored nine of a game-high 17 points for No. 12 Indiana, which closed the first half on a 22-6 run and cruised to an 86-56 Hoosier Classic victory over Miami (Ohio) on Sunday.

The Hoosiers were clinging to a 21-20 lead with 7:43 remaining when Jackson-Davis threw down an alley-oop dunk. Tamar Bates added another one, then Jackson-Davis converted a three-point play.

“We're fortunate to have him down there just because he brings so much attention to himself," Bates said of Jackson-Davis. “He's executing at a high level right now, and that's what we expect of him.”

“You want to send the whole cavalry at him," Miami coach Travis Steele said of Jackson-Davis. “He's a monster down there. And he can make you pay with a pass. He's seen double teams his entire life.”

It was a homecoming of sorts for Jackson-Davis, who was a star at Center Grove High School in the Indianapolis suburbs. He had his first double-double of the season by halftime with 13 points and 10 rebounds and finished with 16 rebounds for the 33rd double-double of his career.

Jalen Hood-Schifino added 12 points for the Hoosiers, who had 10 players contribute at least five points.

“Jalen will be there when it counts,” Indiana coach Mike Woodson said. “He's capable of making big shots.”

Julian Lewis and Mekhi Lairy each had 12 points for the Redhawks (1-3).

Miami came out firing and mostly missing from 3-point range, but the Redhawks stayed close early on. The Redhawks were 7 of 22 from beyond the arc in the first half and finished 10 of 34.

“We’ve got to grow up," Steele said. "We’ve got a very inexperienced group. We’re trying to figure out what wins at college basketball. This ain’t high school anymore. This has been a pattern we’ve had up until this point. We go through these lulls where all of a sudden they go on a big run. Give Indiana credit, they made us pay.”

“I think we just settled in,” said Indiana's Miller Kopp, who had 10 points. “Playing any game, you scout teams and know what they're going to run, but it's different when you're out there guarding them. We really just focused in and got a feel for them. Our defense is unrelenting."

Miami: A rough start for first-year coach Travis Steele, whose team was unable to bounce back from an ugly 95-69 home loss to Marshall. The Redhawks' only win so far is against Goshen.

Indiana: After taking in a Pacers home win on Friday night, the Hoosiers took care of business on the same floor against an outmanned Mid-American Conference foe. Three of Indiana's four victories have been by double digits.