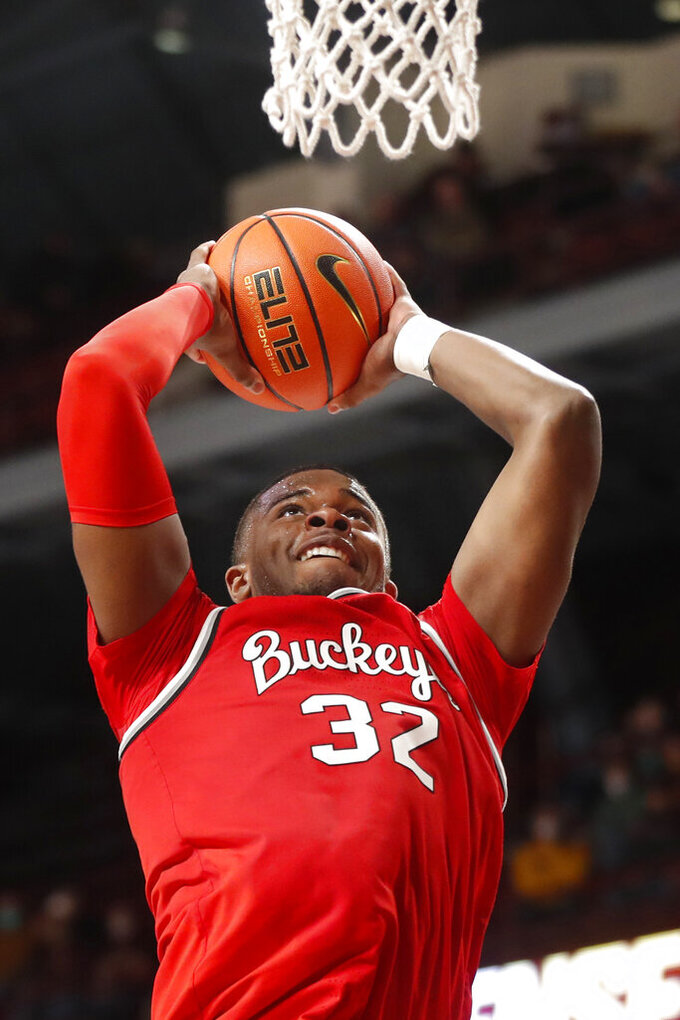 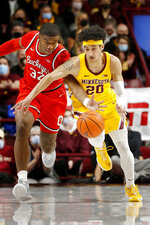 MINNEAPOLIS (AP) — The major scoring milestone E.J. Liddell reached will give the Ohio State star another feat to reflect on later.

The way he and his Buckeyes teammates cleaned up on the glass for a well-rounded road win was much more relevant in the moment.

Liddell had 23 points and a career-high 15 rebounds to help No. 16 Ohio State muscle past Minnesota for a 75-64 victory fueled by a 48-22 rebounding advantage Thursday night.

“We had to come in here with a different type of edge to win this game. I felt like that started on the glass,” Liddell said.

The offensive rebounds were 20-6 for the Buckeyes.

“It didn’t matter what lineup we had in there,” Gophers coach Ben Johnson said. “We just could not find a way to get the ball.”

Liddell, who stretched his double-digit scoring streak to 27 games, became the 60th player in program history to pass 1,000 career points.

“I’m so happy for him. He’s had a phenomenal career. He’s led this team in a really special way,” coach Chris Holtmann said.

Kyle Young scored 14 points and Zed Key had 12 points and eight rebounds for the Buckeyes (13-4, 6-2 Big Ten), who played without point guard Jamari Wheeler — a foot injury keeping him out for the first time in his five-year career after 143 consecutive games.

“We’re making strides. This is the perfect time of year to do it,” Young said.

Jamison Battle returned from an illness to score 15 points for the Gophers (11-6, 2-6), who also had E.J. Stephens back from a COVID-19 absence. Payton Willis and Sean Sutherlin each had 12 points, and Luke Loewe added 11 for Minnesota.

Malaki Branham pitched in with 11 points and six rebounds for the Buckeyes, who played their first conference game in 11 days due to a COVID-19 postponement of their matchup with Nebraska last weekend. They beat IUPUI on Jan. 18 in an add-on game to make up for the three cancellations they had during a 22-day layoff in December.

“They’re kind of what this league is all about,” Johnson said. “They don’t make many mistakes. They’re good on both sides of the ball. You can’t have those lapses, especially glaring ones like getting crushed on the glass, because they make you pay.”

Willis, who had a career-high 32 points on 8-for-13 shooting from 3-point range against Rutgers, carried the Gophers to that feel-good victory on Saturday while three of their top four scorers were sidelined. Against the Buckeyes, Willis was 1 for 5 from deep.

The transfer-heavy team in Johnson's first season is already short on size and depth, and this was another one of those games in the unrelenting Big Ten when cohesion, heart and hustle weren't enough against one of the league's top teams.

“I know for us when we struggle rebounding, it’s not a great feeling,” Young said.

The Gophers knocked down some timely 3-pointers, including one from Battle that gave them a 29-27 lead with 2:50 to go before the break, but a two-point halftime deficit quickly ballooned to double digits with an assertive start to the second half by the Buckeyes.

Holtmann, in his fifth season after arriving from Butler, notched his 100th victory with the Buckeyes. He also won on the raised Williams Arena floor for the first time — same for the players. The Gophers won the previous three matchups here, including on Dec. 15, 2019, when Ohio State was No. 3 in The Associated Press poll.

Ohio State: Getting Johnson back was a spark for a Buckeyes team hindered by injuries as much as any in the league, particularly on a night when Wheeler, the transfer from Penn State, was out. Justice Sueing and Seth Towns have each been sidelined by long-term injuries.

Minnesota: With sixth-year center Eric Curry sitting out with a sprained ankle for the fourth game in a row, the Gophers just didn't have enough length and strength inside. Minnesota freshman Treyton Thompson had five points and four rebounds in 17 minutes, his role significantly increasing, but he was vulnerable defensively against the brawn of the Buckeyes underneath.

Ohio State: Plays at No. 6 Purdue on Sunday afternoon. The Buckeyes and Boilermakers are among the top five teams in the Big Ten standings, all within one game of each other at midweek.

Minnesota: Plays at No. 11 Wisconsin on Sunday afternoon. The last road win for the Gophers over an AP-ranked team was against the Badgers on Jan. 3, 2019.