Michigan on a run at right time in tournament, 'Nova next 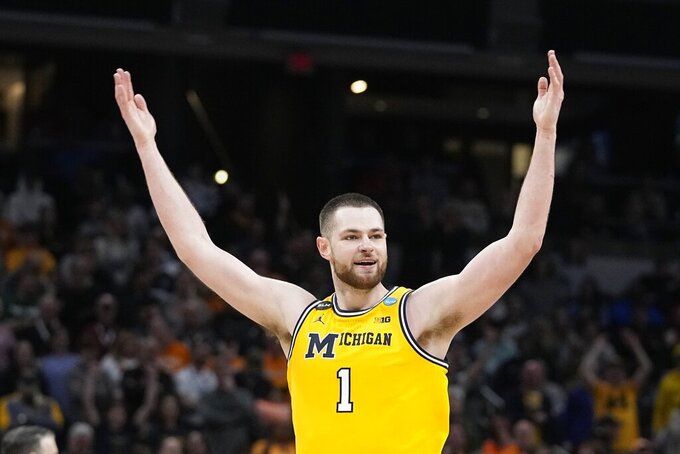 Michigan's Hunter Dickinson (1) celebrates after his team defeated Tennessee in a college basketball game in the second round of the NCAA tournament, Saturday, March 19, 2022, in Indianapolis. (AP Photo/Darron Cummings)

ANN ARBOR, Mich. (AP) — Michigan went into the NCAA Tournament with a troubling trend, alternating between winning and losing for 10 straight games. In a one-and-done tournament, that's not going to work.

So, Hunter Dickinson had an idea.

The sophomore center suggested a scrimmage against the team's student managers as part of the morning walkthrough prior to beating third-seeded Tennessee in the second round.

“We knew about the win-loss thing and it was my idea to play the managers before the game and we lost to them so that the next game we played, it would be our win," Dickinson recalled Monday night while watching Michigan's women's team beat Villanova in the the NCAA Tournament. “It ended up working out for us."

The outcome of the scrimmage was predetermined, of course: Dickinson and his teammates played the role of the Washington Generals, the never-win opponent of the Harlem Globetrotters.

“Yeah, we were the Generals out there,” Dickinson said with a grin.

Michigan might be building momentum at the right time with its first two-game winning streak in six weeks, rallying to beat the Volunteers and sixth-seeded Colorado State. The 11th-seeded Wolverines (19-14) will face second-seeded Villanova (28-7) in the Sweet 16 on Thursday night in San Antonio.

The Wolverines, it seems, are approaching preseason expectations.

Before the season, they were ranked No. 6 in the AP Top 25 and rose to No. 4 in mid-November before plummeting out of the poll for good in December, failing to win more than three straight games.

Toward the end of the regular season, they had to deal with a distraction no one saw coming.

Howard was suspended for the final five games of the regular season while Diabate and Williams had to sit for one.

The fallout forced the team to get closer, and Dickinson said it made them stronger and more resilient as a group. It didn't rattle the Wolverines when they had to play in the first round without DeVante' Jones because he was in concussion protocol, or when symptoms flared up and he missed the second half of the second-round game against the Volunteers.

“We had to play a game and a half without our starting point guard, and we weren’t really fazed by it," Dickinson said. “We’ve had so much adversity throughout the year that it’s nothing new to us and something that I feel like doesn’t shock us at all.”

Howard, who was contrite about his actions at Wisconsin last month, was shocked when former Michigan Fab Five teammate Jalen Rose showed up to support him and the team during their opening-round win over Colorado State.

Two more college teammates, Chris Webber and Ray Jackson, showed up for the next game and celebrated the win with emotional hugs with the third-year coach and former NBA player.

“I will never forget this day, and I appreciate all the support," Howard said. “They have behind the scenes been in my corner from Day One."

Since the 7-foot-1 Dickinson stepped on campus, he has been Michigan's leading scorer and the tournament has brought out his best. He scored 21 points and had four blocks against Colorado State, then had 27 points and 11 rebounds against Tennessee.

Eli Brooks, who returned for his fifth season, is leading from the backcourt by averaging 19.5 points, 5.5 assists and five rebounds in the tournament.

In both games, Frankie Collins has filled in well for Jones. The freshman had 14 points and six rebounds when Jones was out for the first round, and he had to play 30 minutes in the second round.

Michigan's defense, on the perimeter and at the rim, is an asset at times for a team making a fifth straight trip to the Sweet 16.

“I don’t think we’re playing our best basketball, like to our potential," Brooks said after knocking off Tennessee. “We still have a lot of mistakes that we have to clean up. Turnovers, miscommunication. That’s the scary thing with this team. If we keep on staying connected, good things are going to happen down the line."

And to keep the momentum and good times rolling, will the Wolverines run it back against their managers in a scrimmage set up for them to lose?

“We plan on it lol," Dickinson wrote in a text message Tuesday night.