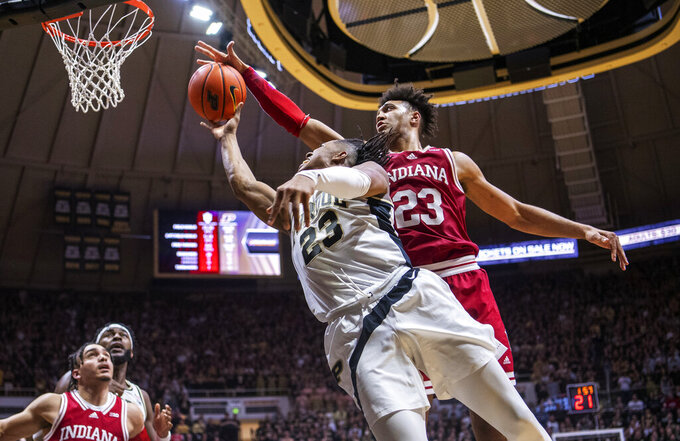 Second-seeded Ohio State lost to No. 15 Oral Roberts in overtime after guard Duane Washington Jr. missed a career-high 14 shots, including a step-back jumper in the closing seconds of regulation with the score tied.

Baylor won its first national title in men's basketball, leaning heavily on three guards in a 16-point win over over Gonzaga. All-America guard Jared Butler, MaCio Teague and Davion Mitchell accounted for 65% of the Bears' scoring in the championship game.

In this year's tournament, here are some backcourt wizards to watch:

In the one-and-done and one-time transfer era, the 6-foot-5, 215-pound shooting guard stayed at the same school for four years and went from a three-star prospect to a first-team All-America player. Agbaji averages nearly 20 points for the top-seeded Jayhawks.

In the NBA draft in June, he might be the first guard selected. Scouts love his explosive hops, blazing speed, scoring knack and defense. Even Memphis Grizzlies star Ja Morant is a fan. The 6-4, second-team All-America shooting guard averages 17 points for the third-seeded Boilermakers.

An ankle injury stunted his game recently, leading to a 3-of-19 performance in a loss to Michigan State in the Big Ten Tournament, and a week of rest might get him right. The third-seeded Badgers certainly need him at full strength because the first-team All-America player averages almost 20 points.

First-year coach Tommy Lloyd inherited quite a team from fired coach Sean Miller, and no player was more valuable than Mathurin. The 6-6 second-team All-America shooting guard averages 17.4 points and 5.6 rebounds for the top-seeded Wildcats.

College basketball seems to have better shooting guards than point guards, but Gillespie is a good 1. He directs an offense that has six players averaging at least nine points. The 6-3 fifth-year senior averages 15.9 points, 3.8 rebounds and 3.3 assists for the second-seeded Wildcats.

Don't miss your chance to see the nation's leading scorer play for Bryant in a First Four game against fellow 16 seed Wright State on Wednesday night. The high-scoring, trash-talking guard scores 25.1 points a game on dunks, shots off the dribble and long jumpers from behind the 3-point arc.

The Bears lost their terrific trio of guards to the pros last year and reloaded with Akinjo, an Arizona transfer, who previously played at Georgetown. The new-look backcourt paired the third-team All-America guard with Flagler, who started his college career at Presbyterian College. Akinjo and Flagler each average 13.4 points and combine for 8.8 assists for the top-seeded defending national champions.

The reigning runner-up is led by a pair of second-team All-America players in Chet Holmgren, the likely No. 1 pick in the NBA draft, and Drew Timme. A senior backcourt sets up the big men for success. Nembhard ranks among the nation's leaders with 3.24 assists for every turnover. Bolton is one of five players averaging 11-plus points for the top-seeded Bulldogs.

Kofi Cockburn gets a lot of credit, rightfully so, but teams have a better chance of collapsing on the All-America center than they do trying to corral Plummer and Frazier. The dynamic duo combines to average 27 points, with more than half of that production coming from behind the 3-point line.

It's no surprise that coach Dan Hurley has a strong backcourt, a pair of seniors who attended another college for two years. Cole, a former Howard star, leads the fifth-seeded Huskies with 15.7 points and 4.1 assists per game. Martin, who previously played at Rhode Island, averages 13.7 points and 7.6 assists.

Coach Eric Musselman loves free-flowing basketball and he has a backcourt to make it happen, led by Notae, a third-team All-America guard. Notae leads the team with 18.4 points while Umude and Toney combine for nearly 22 points and 10 rebounds a game.

If you're not a Kentucky fan and looking for a lower-seeded team with good guards to make a surprise appearance in the Sweet 16, consider the seventh-seeded Racers. Murray State opens with 10th-seeded San Francisco, which also has a strong backcourt, before potentially playing the second-seeded Wildcats in a Bluegrass State matchup.