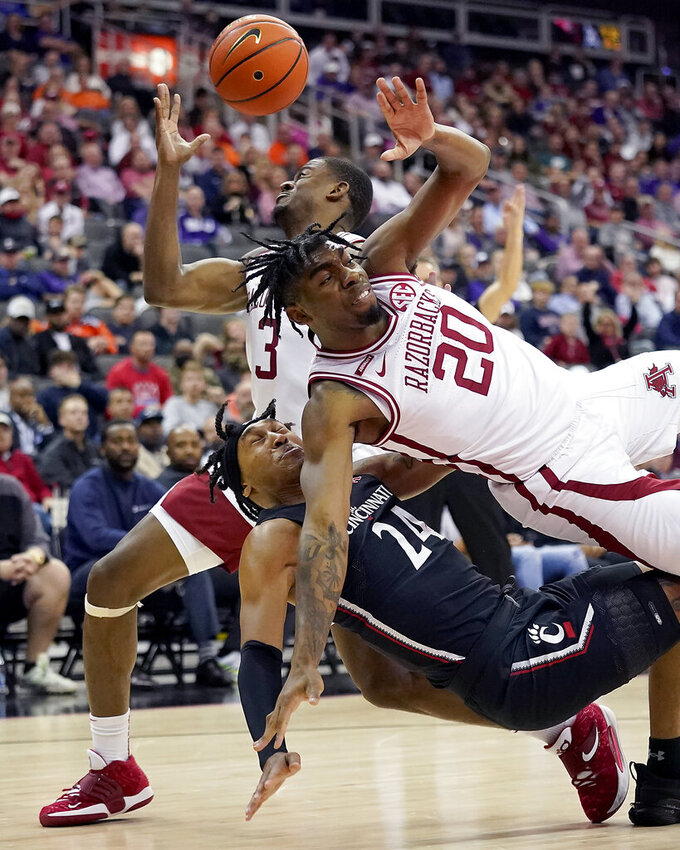 Arkansas' Kamani Johnson (20) and Trey Wade (3) collide with Cincinnati's Jeremiah Davenport (24) as they chase a loose ball during the first half of an NCAA college basketball game Tuesday, Nov. 23, 2021, in Kansas City, Mo. (AP Photo/Charlie Riedel) 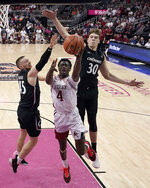 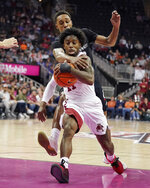 KANSAS CITY, Mo. (AP) — Arkansas was clinging to a one-point lead over Cincinnati in the final minute when JD Notae missed a shot.

The Razorbacks got the offensive rebound, and Au'Diese Toney missed a shot.

And after another offensive board, Chris Lykes missed a shot.

They got one final rebound with 21.8 seconds left, and the Bearcats had no other recourse but to foul. Lykes went to the line and knocked down both of his free throws to pad the lead, and the No. 13 Razorbacks held on from there for a 73-67 victory over Cincinnati on Tuesday night in the championship game of the Hall of Fame Classic.

“I couldn't be prouder of our team on the backboards,” Arkansas coach Eric Musselman said. “From a toughness standpoint at least through this portion of the season, we're as tough as any team in the country. We didn't shoot the ball very well at this tournament and we came away with two wins because of our toughness, our defense and our rebounding.”

Toney led the way with 19 points, including the go-ahead free throws with just over a minute to go. Lykes wound up with 15 points and JD Notae overcame another cold-shooting night to score 13 in a game nobody ever led by more than six.

“We knew Cincinnati rebounding-wise was important. And toughness was going to be challenged,” Musselman said. “You're doggone right, we talked about toughness and rebounding. We dominated the backboards.”

Toney's free throws with 1:23 left gave the Razorbacks (5-0) a 68-67 lead, the fifth time it had changed hands in the final five minutes. Jeremiah Davenport missed at the other end for Cincinnati, and Arkansas grabbed three consecutive offensive rebounds before Lykes was fouled and made two more free throws with 21.8 seconds left.

The Bearcats (5-1) squandered one last chance when Mike Saunders Jr. was called for charging with 9.6 seconds to go.

“We're the team that's going to be the toughest,” Toney said. “We out-toughed the other team.”

“We've been facing teams that have been really aggressive on the offensive glass the last couple of games. I think the athleticism and the ability to pursue the ball with Arkansas is just a little bit different,” Cincinnati coach Wes Miller said. “Our ability to get the ball is probably the difference.”

There wasn't much offense early from two teams that have the ability to fill up the bucket.

The Razorbacks struggled with their outside shot, going 0 for 10 from beyond arc in the first half. And the Bearcats had trouble on the glass, where they didn't get a single offensive rebound until the waning minutes.

Cincinnati also dealt with a bunch of foul trouble while building a 30-26 halftime lead. Mika Adams-Woods took a seat with three fouls after playing just seven minutes, and big man Victor Lakhin went to the locker room with two fouls.

It forced first-year Bearcats coach Wes Miller to use some creative lineups late in the first half.

They continued to maintain their meager lead in the second, even though just about every rebound and loose ball went the other way. On a single trip down floor, Arkansas forward Jaylin Williams missed a 3-pointer, Connor Vanover got the board and was tied up, then Lykes missed a shot before the sprightly guard finally got one to go.

The game remained nip-and-tuck all the way to the finish.

"That was a great game from a spectator standpoint, unless you're interested in cosmetic offense," Musselman said. “I think a lot of people across the country watched the game and respect our team for how hard we play.”

Chiefs tight end Travis Kelce, who starred at Cincinnati before heading to the NFL, took in the championship game from courtside seats. Kelce often shows up for college basketball games at T-Mobile Center, and the timing of the Bearcats in the Hall of Fame Classic worked out perfectly; the Chiefs (7-4) have a bye this week.

Cincinnati had plenty of chances, including when it led 56-53 with less than seven minutes to go. That's when DeJulius and Hayden Koval missed consecutive 3-pointers, and the Razorbacks capitalized on the misfires to pull ahead.

Arkansas struggled again from beyond the arc, going 3 of 17 in the championship game. The Razorbacks were 3 of 22 from 3-point range when they held off Kansas State in the semifinal round.

The Bearcats play Monmouth on Saturday. The Razorbacks face Pennsylvania on Sunday.