No. 15 Kentucky bounces back to beat Mississippi State 80-72 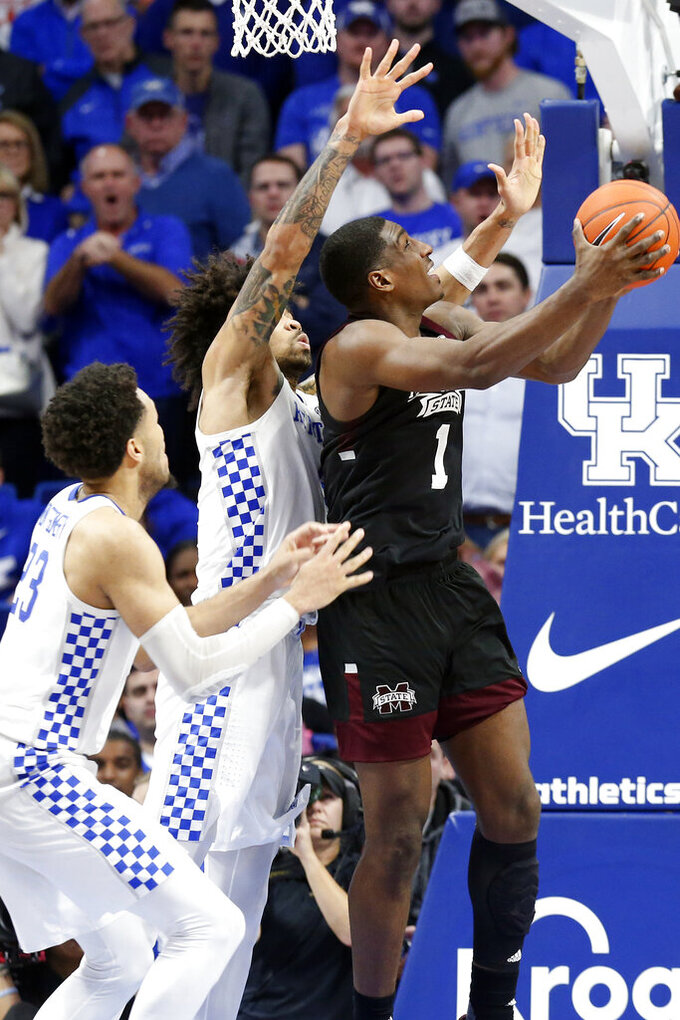 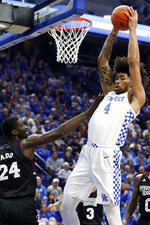 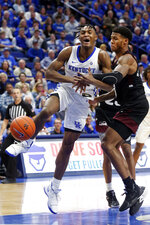 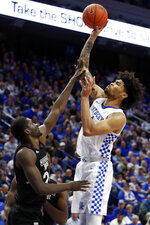 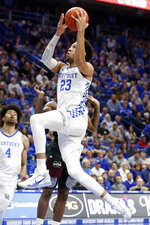 LEXINGTON, Ky. (AP) — Challenged by coach John Calipari to be tougher, Kentucky made its presence felt against Mississippi State.

Especially Nick Richards, who took the criticism and asserted himself on both ends of the floor.

Richards scored a career-high 27 points, including 25 in the second half, Immanuel Quickley added 21 and No. 15 Kentucky beat Mississippi State 80-72 on Tuesday night for its 14th consecutive victory over the Bulldogs.

Seeking to regroup after last weekend's 75-66 loss at No. 11 Auburn, the Wildcats (17-5, 7-2 Southeastern Conference) never trailed and led by as many as 14 midway through the second half. They were quicker and more physical against the Bulldogs, outscoring them 38-34 in the paint and 25-8 on the break.

Kentucky also drew fouls and made 31 of 36 chances from the line, including its final 16.

After totaling just seven points and seven rebounds on Saturday, Richards bounced back big by making 7 of 10 from the field and grabbing 11 rebounds for his 10th double-double this season. The 6-foot-11 junior shook off 1-for-4 shooting in the first half to hit all six attempts in the second half and 13 of 15 free throws.

“He's really one of the dominant bigs in all of college basketball,” Howland said of Richards. “The way he shoots the ball, his foul shooting was tremendous. I thought they did a good defensively protecting the paint.”

Quickley offset 3-of-11 shooting to make all 14 from the line and tie a school record for most free throws without a miss. Montgomery added 12 points to score in double figures for the first time in five games and had eight rebounds, his highest total since grabbing 10 against Utah in December. Montgomery also had three of Kentucky's seven steals.

“What EJ did is what my vision for him is,” Calipari said. “Notice that he didn’t take many jump shots and the ones he did, he missed. Everything else was at the rim. He squared up and drove the ball and that’s all we’ve been trying to get him to do.”

D.J. Stewart Jr. and Robert Woodard II each had 15 points and leading scorer Reggie Perry 14 points for Mississippi State, which outrebounded Kentucky 40-37 but shot just 37% and 31% from long range. The Bulldogs lost for just the second time in seven games.

Mississippi State: Perry had averaged 20.3 points and 11 rebounds in his previous 10 games, but he struggled against Kentucky at both ends. The forward shot just 4 of 16 and had eight rebounds before fouling out. Stewart and Woodard each made 6 of 10 from the field, but the Bulldogs didn't string together many baskets until late and couldn't stop Kentucky's march to the foul line.

Kentucky: The Wildcats had room for improvement in several phases and were consistent on both ends. Their only weakness was 1-of-10 shooting from beyond the arc, which didn't matter because they were strong inside the line. Ashton Hagans had six points and six assists.

“We learned from the mistakes, we got better in practice and the coaches emphasized what we needed to do,” Richards added. “We weren't rebounding as a team and did drills to make ourselves more aggressive, more active on the glass, and just got better from it.”

Kentucky visits border rival Tennessee on Saturday, looking to end a two-game slide against the Volunteers.