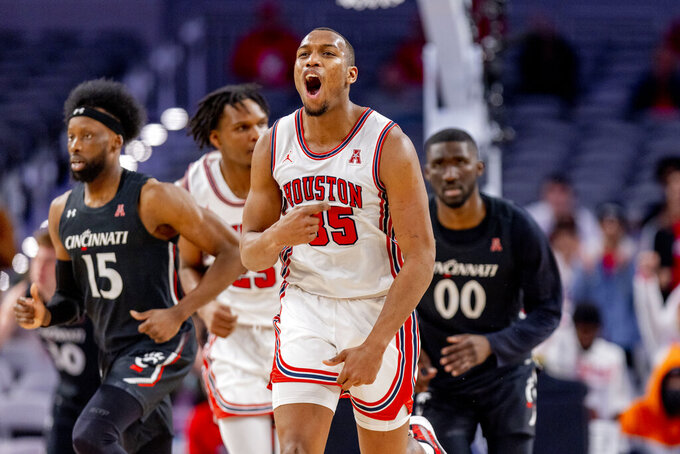 Houston forward Fabian White Jr. (35) celebrates after a making a basket during the second half of an NCAA college basketball game against Cincinnati in the quarterfinals of the American Athletic Conference tournament in Fort Worth, Texas, Friday, March 11, 2022. (AP Photo/Gareth Patterson) 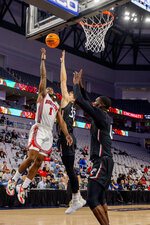 FORT WORTH, Texas (AP) — Houston looked more like itself in the second half, with the 18th-ranked Cougars counting on big man Fabian White Jr. to finish off their American Athletic Conference tournament opener.

White was 5-of-7 shooting while scoring 11 of his 18 points after halftime, and finished with eight rebounds, and the Cougars overcame a 10-point deficit to beat Cincinnati 69-56 in an AAC quarterfinal game Friday.

“Once we got to halftime, we just came up with a new plan ... here’s what we’re going to do, play through Fabian and extend our pick-and-roll defense,” Cougars coach Kelvin Sampson said. “Cincinnati played with a lot of confidence that first half, whereas we played like this was our first game of the tournament."

It was, and came only five days after the Cougars (27-5), an NCAA Final Four team last season, dropped their regular-season finale 75-61 at Memphis to end a six-game winning streak.

"Second half, we looked more like us,” Sampson said.

White had two jumpers and fellow first-team All-AAC forward Josh Carlton also added two baskets in a 12-0 run that put Houston (27-5) ahead to stay during a stretch when the Bearcats started missing every shot — they missed plenty all day against a defense that allows teams less than 60 points a game on 37% shooting.

This was the fourth AAC tournament in a row in which Cincinnati and Houston played each other. The previous three had been in championship games, with the Bearcats winning in 2018 and 2019 before the Cougars won 91-54 for last year's title after the 2020 tournament was called off because of the COVID-19 pandemic.

The eighth-seeded Bearcats (18-15) had to play a first-round game for the first time in their nine AAC tournaments, and beat East Carolina 74-63 on Thursday to advance. Cincinnati had finished the regular season by losing its last five games and seven of eight.

“I’m really proud of our guys. I thought they fought like absolute crazy tonight and yesterday,” first-year Cincinnati coach Wes Miller said. “Given the way we finished the year in the win-loss column, I think you have to recognize that. ... This group has been admirable throughout the last four weeks, through a tough stretch to keep trying to come back and figure it out.”

Jamal Shead had 15 points and seven assists for the Cougars, and Kyler Edwards had 12 points.

Jeremiah Davenport and John Newman III had 13 points each for Cincinnati, which shot season-low 28.8% (17 of 59), which included seven of 32 on 3-pointers. Newman was 6 of 9 shooting while Davenport was 4 of 14, making only 3-of-11 from beyond the arc. Mika Adams Woods scored 10 points.

The Cougars had their first lead since 2-0 in the game's opening minute when Shead had a alley-oop pass to Carlton for an easy basket that put them up 40-39 with 14:14 left. Carlton, who was scoreless in the first half when he played only five minutes because of foul trouble, wrapped up the go-ahead 12-0 run with a reverse layup.

White later extended the lead with a strong inside hook shot followed by a 3-pointer.

“I was just trying to be a better leader than the 1st half ... my energy and effort really, I was trying to lead by example,” said White, who is in his fifth season with the Cougars. “Our mindset is keep playing games as long as y’all let us.”

Cincinnati: The Bearcats have a 33-11 series lead, but have lost their last six games against Houston. That includes all three by double digits this season. ... DeJulius, their leading scorer at 14.7 points per game, finished with nine points on 3-of-16 shooting. He missed eight of nine from 3-point range, the only made 3 being a step-back shot for a 30-27 lead before halftime.

Houston: The Cougars are 6-0 in games at Dickies Arena, which next week will host an NCAA regional. They are 4-0 in AAC tournament games, and regular-season victories over Texas Tech and Oklahoma State the last two seasons.

Houston, in the AAC tournament semifinals for the fourth consecutive time, plays Tulane (14-14) on Saturday. The fifth-seeded Green Wave beat Temple 69-60 in their quarterfinal game.