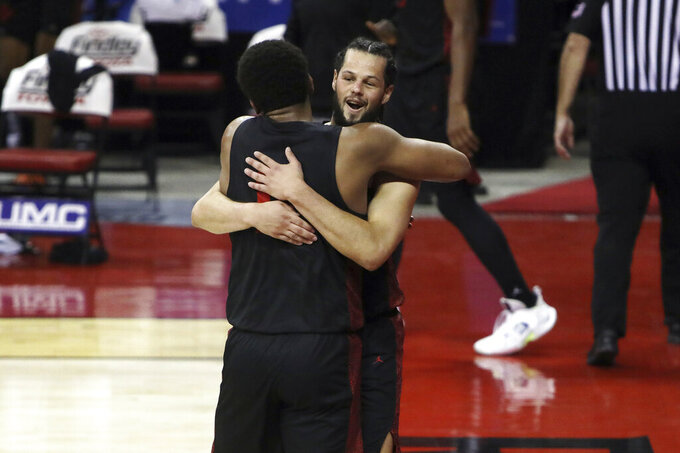 LAS VEGAS (AP) — Winning their 11th straight game and the Mountain West Conference regular-season title was just another step for the No. 19 San Diego State Aztecs.

“The most meaningful basketball is still ahead of us,” coach Brian Dutcher said after SDSU beat UNLV 71-62 Wednesday behind 19 points from Matt Mitchell and 16 from Jordan Schakel.

Nathan Mensah scored 14 points for the Aztecs (20-4, 14-3 MWC), who used a 14-0 run spanning halftime to take control. They get a week of rest before returning to Las Vegas as the No. 1 seed in the conference tournament.

With its NCAA Net Ranking at a season-high No. 17, SDSU appears to have done enough to get an at-large berth in the NCAA Tournament if it doesn’t win the conference tourney and secure the MWC’s automatic bid.

“What this team accomplished this season was really special because of the circumstances we had to do it in,” Dutcher said. “We started back in September with one coach in gloves and a mask, one basketball, one player, and we couldn’t rebound the ball for the player. And to think a few months later we’re celebrating a conference championship. It’s a credit to everybody in our program.”

The Aztecs gave Dutcher an ice shower afterward. “I'm still picking ice out of my ear,” the coach said.

The Aztecs controlled their own destiny during the last week after the MWC awarded them a pair of forfeit victories over New Mexico for a series that wasn’t played because the Lobos had injuries but no COVID-19 cases. Those forfeit victories don’t count in SDSU’s overall or formal conference record, but will count for seeding and conference championship implications. SDSU swept two home games against Boise State during the weekend.

David Jenkins Jr. scored 32 points for UNLV (11-13, 8-9), while leading scorer Bryce Hamilton was held to nine points, nine under his average, and fouled out with 1:41 to go.

SDSU opened a 16-point lead in the second half before UNLV cut it to eight points. The Aztecs responded with a 9-0 burst for a 62-45 lead, with Mensah getting a slam dunk and making four free throws and Schakel hitting a 3. Schakel finished with a career-high nine rebounds, just missing his first career double-double.

SDSU scored the final seven points of the first half as part of a 14-5 run and led at halftime for the 12th straight game, 35-28.

The Aztecs continued the run by scoring the first seven points of the second half to run the lead to 42-28. Schakel hit a 3-pointer, Mensah scored inside and Mitchell had a nice spin move for a layup, drew a foul and made the three throw.

Trailing 23-21, the Aztecs got five points in five seconds. Schakel hit a 3-pointer and Mitchell stole the inbound pass and dunked for a 26-23 lead.

SDSU was 30-2 last year and most likely would have received a No. 2 seed in the NCAA Tournament before it was canceled due to the coronavirus pandemic.

“It's nice after everything we’ve been through,” Schakel said. “It's been a long, long journey. Hopefully we'll make it to the tournament and play for the guys who didn’t get the chance last year. It would have been really special last year.”

SDSU: Mitchell, a senior, moved past three players and into sixth place on the Aztecs' all-time scoring list with 1,408 points. ... This is the first time in school history the Aztecs have won consecutive outright regular-season conference titles.

UNLV: Hamilton came in leading the Runnin' Rebels with 18.5 points per game, but had a tough time getting going. He had only four points at halftime while committing three fouls.

SDSU has seven days off before the quarterfinals of the MWC tournament on March 11.

UNLV ends its regular season at Wyoming on Saturday night.