No. 21 USC rallies in second half to top Pacific 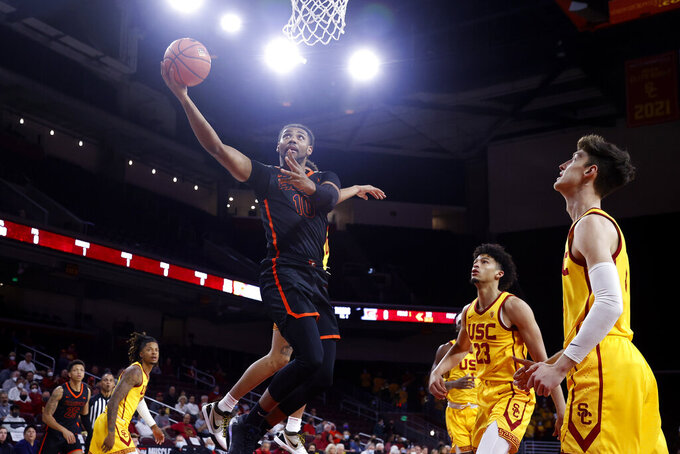 Pacific guard Alphonso Anderson (10) goes to the basket against Southern California during the first half of an NCAA college basketball game Tuesday, Feb. 8, 2022, in Los Angeles. (AP Photo/Ringo H.W. Chiu)

Mobley, who leads the team in scoring, rebounding and assists was out with a non-displaced nose fracture.

The Trojans (20-4) rallied from a 13-point second-half deficit for the win. USC’s comeback was aided by three 3-pointers from freshman Harrison Hornery, who entered with just five total points in 15 career minutes. Chevez Goodwin and Drew Peterson each had 12 points for the Trojans.

Alphonso Anderson had 22 points and nine rebounds for Pacific (7-16), while Nick Blake added 12 for the Tigers, who have another ranked test ahead with a West Coast Conference game at No. 2 Gonzaga on Thursday.

The Tigers showed they were not looking ahead when they took a 22-12 lead with 9:26 remaining in the first half before USC ended a 1 of 10 drought from the field. Pacific led 30-22 at halftime, they pushed their advantage to a game-high 13 points at 39-26 with 17:01 remaining after a layup from Nick Blake.

“Defensively in the first half, we gave them too many shots at the rim,” USC head coach Andy Enfield said. “In the second half, we went to zone and did a better job protecting the lane and the 3-point shots. Our goal was to speed the tempo with the press, but we couldn’t make shots so we couldn’t press.”

After a Drew Peterson basket with 5:27 remaining gave USC a 57-56 lead, the Trojans never trailed again while winning for the third time in their last four games.

Hornery finished with nine points for the Trojans on 3-of-4 shooting from 3-point range.

“I knew my time would come,” said Hornery, an Australia native who attended to nearby Mater Dei High School. “I’m behind an All-American (Mobley). I’ve been on big stages before in my high school career. I was out there with a veteran team, so it came easy.”

Pacific had a 38-29 rebounding advantage, while taking advantage of the play inside without Mobley. Khaleb Wilson-Rouse had 11 points for Pacific.

“I’m super proud of our kids and (rebounding) is something we have been working on the entire year and I think our kids are slowly starting to get it,” Pacific head coach Leonard Perry said. “I thought we competed on the glass and we didn’t give up a bunch of second shots.”

Pacific: Easily Pacific’s toughest week of the season with a pair of ranked teams on the schedule, the Tigers proved they were not afraid of the challenge with a big first-half lead. Saturday’s game at Gonzaga is an even bigger challenge, but the Tigers are on the rise with six more WCC regular-season games remaining.

USC: The Trojans looked like a team playing in a game just added to their schedule in a lightly-attended home game. There will be far more energy in their building Saturday when they face No. 12 UCLA for the first time this season. The Trojans have a four-game winning streak over their rival.

Pacific: The Tigers travel to Spokane, Wash., to face No. 2 Gonzaga on Thursday

USC: The Trojans play host to cross-town rival No. 12 UCLA on Saturday.