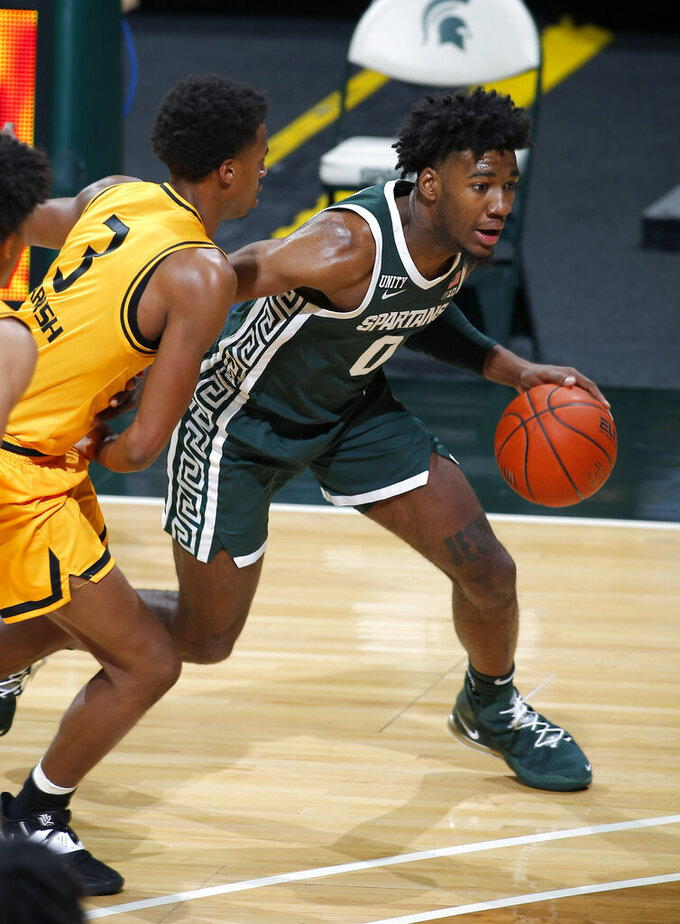 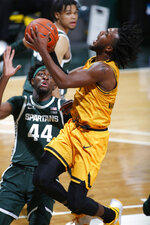 “That was a game for the media, for TV, for our fans, for our parents, and for our players — because we scored 109 points," Izzo said. "For the coaches, there were some disappointments defensively.”

Gabe Brown scored a career-high 20 points, and No. 4 Michigan State used a 13-0 run early in the second half to pull away to a 109-91 victory over Oakland on Sunday. Rashad Williams scored 23 of his 36 points in the first half for Oakland, his second straight huge game against a big-name opponent.

The Golden Grizzlies (0-7) trailed by one shortly after halftime before Michigan State (6-0) quickly pushed the lead into double digits.

“Our 3-point defense and our dribble penetration were atrocious," Izzo said. “On a strong point ... we went into halftime, and nobody was very happy, and our kids responded. I think that was positive.”

Williams made 10 3-pointers in a 32-point effort at Oklahoma State on Dec. 5. He made six 3s in the first half Sunday, and Oakland trailed by just four at halftime despite struggling to keep Michigan State off the boards.

Williams made another quick 3 in the second half, and Jalen Moore’s layup cut the lead to one at 46-45. Then Henry answered with a 3-pointer, and Langford made a layup and a 3 for the Spartans.

Langford is back this season after missing nearly two years because of injury problems. This was a season high in scoring for him.

“I'm starting to get a little rhythm in," he said. "I think that's a testament to not just me but my teammates and my coaches. They've done a great job of just continuously encouraging me, and my teammates trying to find me in different areas throughout the games.”

After his early 3 in the second half, Williams didn't score again until a three-point play with 10:35 remaining.

Oakland has been limited by coronavirus-related problems and has been overmatched at times against a tough schedule. The Golden Grizzlies lost by 52 to Xavier, by 27 to Toledo and by 43 to Purdue.

But Oakland took Michigan to overtime before losing, and the Golden Grizzlies have been competitive against Michigan State in the past. They kept it close for a while Sunday before falling to 0-19 in this series.

“I thought our zone frustrated them at times, confused them,” Golden Grizzlies coach Greg Kampe said. “... I'm probably the only coach in the world who just gave up 109 points that would say, ‘Man, I really liked our defense.’"

Oakland: The Golden Grizzlies were outrebounded 52-20, and at times it felt like they couldn't stop Michigan State unless they forced a turnover. They can still be excited about what Williams has been able to do against good competition.

“Today was a huge step forward for him and his career and what he's going to do after Oakland and all that kind of stuff,” Kampe said. “He showed people today he's a prospect.”

Michigan State: It was no surprise that this game against an in-state opponent was tough for a while. The Spartans had balance, with eight players scoring at least nine points.

Part of the reason Michigan State had such balanced scoring is because the Spartans went deep into their bench.

“We’re playing a zillion guys. It’s not going to just end, but it’s going to start shrinking a little bit," Izzo said. "I think (forward) Julius Marble’s proving that he can do some things. We’ve got to get him more time.”

Michigan State’s big test this past week was supposed to be Wednesday at No. 18 Virginia, but that game was called off because of COVID-19 issues with the Cavaliers. Izzo said his team is hoping to schedule another game. The Spartans can expect to stay near the top of the poll until they lose.