No. 6 Purdue dominates middle to take down Wright St 96-52 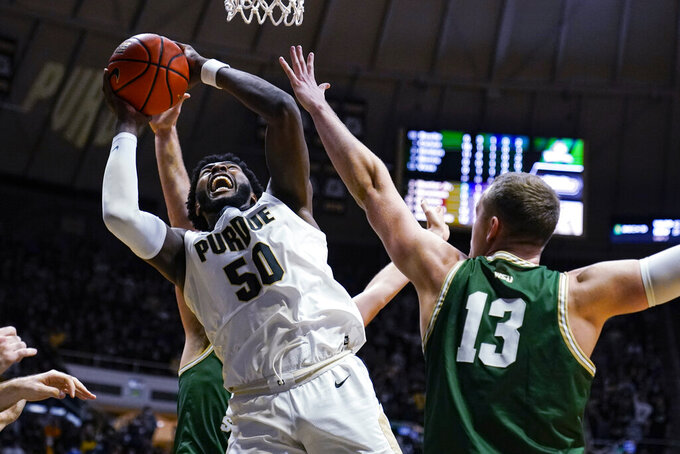 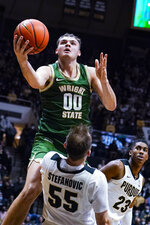 He delivered the usual highlight dunks, strong rebounds and jarring screens. He also made a nifty behind-the-back pass, took a defender off the dribble, showed he could hit some jumpers and even threw in a couple of dance moves as he celebrated.

Williams finished with 20 points and 13 rebounds, helping the sixth-ranked Boilermakers blow out Wright State 96-52 on a night he became the 16th player in school history with 1,000 points and 650 rebounds.

“That was never my mindset," Williams said. “I just wanted to be a part of something special, I wanted to win. But I knew I couldn’t do that without making some sacrifices and getting my body in shape.”

By trimming weight and working on his athleticism, the preseason All-American has become one of the nation's most challenging matchups though he's been coming off the bench this season.

And with 7-foot-4 center Zach Edey and 6-10 true freshman Caleb Furst also playing well, the Boilermakers have exploited an even bigger advantage in the post than they have over the last decade. So far, nobody has found a solution for Purdue's big three, certainly not the undermanned Raiders (1-2).

Edey had 18 points and 12 rebounds while Furst added 14 points and 10 rebounds. Purdue is off to its first 3-0 start in three seasons and shot better than 50% for the third straight game, its longest streak since December 2000.

The defending Horizon League regular-season champs were led by Trey Calvin with 21 points and Tanner Holden with 17. But any chance they had of staying close evaporated quickly with Edey and Williams patrolling the middle.

“It’s a good team from the perimeter, a good team inside. I think a lot of teams are going to struggle to stop them this year,” Wright State coach Scott Nagy said.

Edey helped Purdue take control quickly by breaking to a 14-3 lead. Then Williams got going with back-to-back three-point plays and Edey's layup capped a 14-0 run that extended the margin to 33-10.

Wright State never recovered. It gave up the final eight points of the first half, falling into a 51-17 deficit and trailed by as much as 49.

“You get Zach Edey beating on you for four or five minutes and you want a break and then here comes Trevion," coach Matt Painter said. “He (Williams) was so good finishing games for us last year. He's just been great for us this year."

Wright State: Ten players returned from last season's title team but it didn't look like a conference contender Tuesday. The Raiders struggled against Purdue's size, strength and speed. Of course, not many Division I teams are built like Purdue, so better days lie ahead for the Raiders.

Purdue: Painter's team has thrived in these first three games, shooting 50% or better from the field in all three — their longest streak since a four-game stretch in February and March 2018. With two NCAA Tournament contenders up next, the Boilermakers soon will find out where they actually stand.

Wright State: Grant Basile had seven points after scoring a career-high 37 in Friday’s loss at Marshall. ... The Raiders were outrebounded 56-23 and outscored in the paint 46-16. ... This was the first meeting between the two schools. ... The Raiders' career scoring leader, Bill Edwards, is the father of former Purdue star Vince Edwards.

Wright State: Takes on George Washington at the Naples Invitational on Monday in Florida.