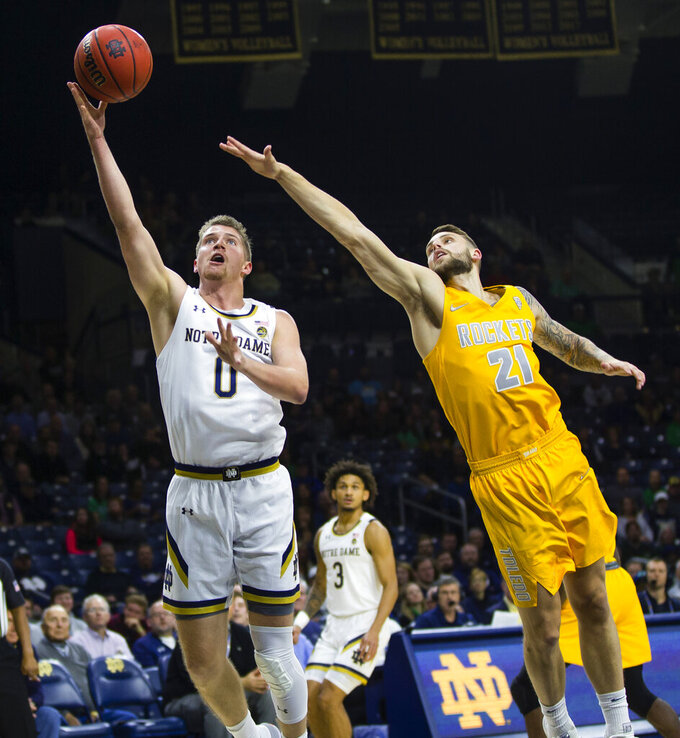 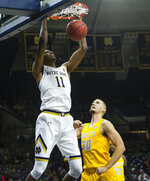 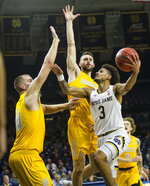 SOUTH BEND, Ind. (AP) — Notre Dame appeared “dead in the water like seven times,” according to coach Mike Brey, yet T.J. Gibbs and Rex Pflueger kept finding ways to resuscitate the Fighting Irish during their improbable 64-62 overtime victory over Toledo on Thursday night.

Gibbs made two steals in the final 35 seconds of the extra period and assisted Pflueger on the backdoor, go-ahead basket with 25 seconds left.

The Irish had already rallied from a 52-45 deficit in the final three minutes of regulation, capped by sophomore sub Nate Laszewski’s right-wing 3-pointer at the horn. It came off an inbound from Pflueger with 1.5 seconds to play.

Gibbs’ first steal in OT led to Pflueger’s basket and a 60-59 Irish lead. He followed with another steal and added two free throws for a 62-59 count.

“It was just out of our motion,” Brey said of Pflueger’s game-winner. “It was not a called play. I think (it was) two senior guards just connecting and communicating.

“And how about Rex Pflueger?” Brey continued. “I could care less about his shooting (2 of 10 from the field). He makes every play, big play, clutch play. Such a winner.”

A missed 3-pointer by the Rockets’ Willie Jackson with four seconds left in OT led to Pflueger hitting two free throws at 1.1 showing to clinch the game.

More maddening for Toledo coach Tod Kowalczyk than overtime was the end of regulation.

“I gotta be honest,” he added. “That one hurts. We gave it away. I thought we were the better team.”

The Irish (5-1) won their fifth straight overall in what was effectively the title contest of the five-team, round-robin Men Against Breast Cancer Invitational.

Irish star John Mooney, in his return from a stomach virus that kept him out of Monday’s win, netted a season-low seven points on 3 of 11 from the field and 1 of 5 at the line, but added 15 rebounds.

Marreon Jackson poured in 23 points for Toledo (3-2), while Jackson added 20 rebounds to go with 11 points. Chris Knapke scored 16 points for the Rockets.

Toledo: A potentially resume-building win for the Rockets went by the wayside. They’ll have precious few of those opportunities over the rest of their schedule.

Notre Dame: The Irish continued to build steam heading closer to their Dec. 4 visit to No. 6 Maryland. They also have matchups next month with UCLA and Indiana, both undefeated entering Thursday.

The Rockets paid for an uncharacteristically poor shooting effort from outside the arc.

“I think the law of averages will kick in,” Brey said. “I’ll say this, we had some good looks. I thought we settled for some shots instead of driving it some when we could’ve.”

Marreon Jackson was admittedly seething after his team’s loss.

“We’re gonna look back on this game the rest of the season,” Jackson said, “because that will never happen again.”