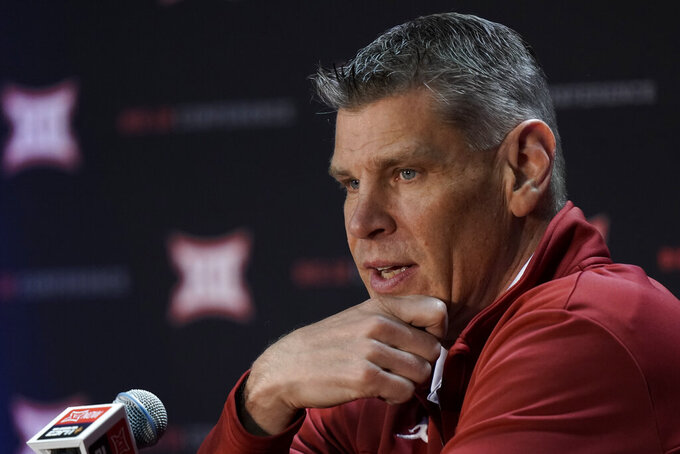 So much has changed with the Oklahoma program.

Porter Moser has come in from Loyola-Chicago to replace retired coach Lon Kruger. And last year’s top three scorers have moved on. Austin Reaves is now with the Los Angeles Lakers. Brady Manek has transferred to North Carolina and De’Vion Harmon transferred to Oregon.

The Sooners brought in several transfers to make up for the talent lost from a squad that went 16-11 and reached the second round of the NCAA Tournament.

Moser said there’s only one way to move forward.

“The only answer to that is time. It takes time,” he said. “We were able to work with them in the summer, which is great, but limited hours. That’s why you’re going to continue to learn and come together once these games start. Once you go through adversity, celebrations -- you learn and you grow throughout that process.”

Tanner Groves, a 6-9 forward, was the 2021 Big Sky Conference Player of the Year for Eastern Washington last year. He averaged 17.2 points and 8.0 rebounds while shooting 56.0% from the field as a junior last season.

“He’s got an energy about him,” Moser said. “He’s one of our loudest guys in practice every day. He’s communicating, he’s talking. He’s been a sponge to learn, watching tape, comes up, watches a ton of extra tape. He wants to be good.”

His brother, Jacob Groves, is a 6-7 forward who averaged 9.3 points and 4.2 rebounds for Eastern Washington last season while shooting 55.2% from the field as a sophomore.

Another key newcomer is Jordan Goldwire, a graduate transfer from Duke. The member of the All-ACC defensive team averaged 5.8 points and 4.0 assists last season. His 2.25 steals per game last season rank ninth in Duke history, and he led the ACC in assist/turnover ratio.

“I think the guys respect where he’s been,” Moser said. “They’re looking to him for leadership for where we’re going. So am I.”

Ethan Chargois, a 6-9 forward, is a super senior who transferred from SMU. He started 86 of his 108 career games for the Mustangs and averaged 9.5 points, 4.9 rebounds and 1.7 assists.

The key will be putting it all together.

“For me, being the first year, there’s a lot of unknowns,” Moser said. “You think you know based on practice and what they’re doing, but once the games get going, you really start learning a lot about your team.”

Oklahoma plans to move to the Southeastern Conference in 2025, and the Sooners expect to hear about it when they visit Big 12 venues.

“You probably got to anticipate it,” Moser said. “You just control what you can control. Even watching on TV, all those places are hostile anyways. It’s not easy to go into any of these arenas anyways. If it’s an additional, it is what it is. It’s still going to be the same hard atmospheres to play and win in.”

Kruger led the Sooners to a 195-128 record in 10 years and reached seven NCAA tournaments in his final eight seasons.

“It’s an honor to follow a guy like that,” Moser said. “Did an unbelievable job in the 10 years he was there, not only winning, but he did a phenomenal job in the community.”

Moser had a sterling resume over the past four seasons at Loyola-Chicago, where he went 99-36 and saw his teams win three Missouri Valley Conference season titles, reach the Sweet 16 twice and go all the way to the Final Four in 2018.

Moser mentioned facing great coaches as a draw to the job.

“Truly, it’s an unbelievably coached league,” he said. “This is my first year in it, but watching from the outside, knowing these guys, you can just watch on TV and see the success they’ve had, how hard every team defends.”

The Sooners have four freshman guards.

The Sooners open Nov. 9 vs. Northwestern State, then they will play in the Myrtle Beach Invitational Nov. 18-21. They will host Florida on Dec. 1 and Butler on Dec. 7, then will play No. 16 Arkansas on Dec. 11 in Tulsa.