Pandemic forcing teams to adjust their schedules once again 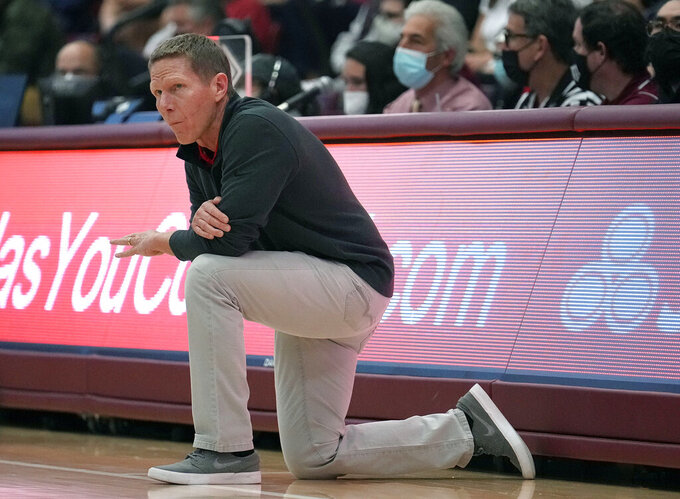 Last season in college basketball, teams and conferences knew pandemic-related postponements and cancellations were pretty much assured. They prepared accordingly.

This season has been full of unpleasant surprises, in part because some of the scheduling precautions weren't taken. The virus threat had seemed to be slowing down until the particularly contagious omicron variant arrived and started disrupting rosters.

The NCAA doesn't include previously postponed games that now have a makeup date in those totals. If those rescheduled games are taken into account, about 9.5% of men’s games and 10.7% of women’s games through Jan. 3 had been postponed or canceled, according to Associated Press research. As of Thursday, that means 445 women’s games and 410 men’s games.

Finding new dates for all those games can prove tricky, particularly since many conferences didn’t prepare for the likelihood of postponements the way they did last season. The Big 12, for example, kept the final week of last season open to schedule makeup games; it did not do that this season.

“This year, it was going well,” Big 12 executive associate commissioner John Williams said. “We'd actually gotten through football. We'd started on time like we were supposed to. We didn't really foresee that until that first week that it hit, and we lost three games in that first week of January. By then, it was too late to move the schedule back.”

The Big 12 has been luckier than most: It had only three conference games postponed thus far, and one of them already has been made up. It has not been as easy elsewhere.

“During the 2020-21 basketball season, we built a lot of wiggle room, several trap doors, collapsible bye weeks anticipating some volume of rescheduling,” said Michigan State associate athletic director Kevin Pauga, who sets up schedule optimization plans for several conferences. “There aren’t as many trap doors in these schedules (this season) for a whole host of reasons.”

Rescheduling games is particularly important for a conference such as the WCC, which is in position to get four NCAA Tournament bids for the first time ever with Gonzaga, BYU, Saint Mary’s and San Francisco all having NET rankings in the top 40.

The best way to help those teams get bids is to make sure the contenders play one another as often as possible. The WCC had its entire first week of conference competition wiped out and some 20 men’s games and 18 women’s games postponed, though most have been rescheduled.

“I think the most important thing, quite frankly, for our league is we have this once-in-32-year shot at advancing four teams,” said Gonzaga coach Mark Few, referring to his 32 seasons at the school. “So that needs to be our highest priority, making sure we get those games and those games are in the proper time where teams are rested and ready to play and not just shoving other games in.”

The Big East learned from last season. This season, the Big East office is the ultimate arbiter in arranging makeup dates; last year, the league worked in conjunction with the two schools.

“The situation was much more fluid (last season) in terms of the number of teams that had to go on pause, in terms of the number of cases per team,” Jackson said. “And in those discussions with schools, sometimes there were situations where by schools just didn’t feel that from a physical standpoint, a mental health standpoint of players, that they were prepared to play. It was just different.”

Other conferences have different protocols. The WCC asks schools to try to decide on a makeup date themselves. If they can’t reach an agreement within 48 hours, Nevarez either reschedules it or declares it a no contest.

No matter how it’s done, rescheduling these games can cause inconveniences. Butler’s scheduled New Year’s Day game at UConn got moved to Jan. 18 — two nights before they faced off again in Indianapolis. Plenty of other teams also have been forced to play games on short rest.

“This is uncharted territory,” UConn coach Dan Hurley said after the first of his team's two victories over Butler this week. “I don't know how these things are going to feel.”

And it isn’t just conference games that have been impacted. Plenty of notable nonconference matchups have been scrapped, including the annual Kentucky-Louisville showdown that still has no makeup date.

Evansville started its season by playing 12 games over the course of 30 days, then went 25 days between games due to various postponements and cancellations

All the postponements and cancellations at least have prompted schools to get creative with their scheduling. Pauga noted how Loyola Chicago and San Francisco — two mid-major teams seeking to upgrade their postseason credentials — set up a Jan. 6 neutral-site matchup in Utah.

Pauga compared it to the ESPN BracketBusters event that ended in 2013. The made-for-TV event matched top teams from non-power conferences in matchups arranged well into the season.

“There were some things learned relative to just understanding that games can be put together on short notice,” Pauga said.

It's a skill hundreds of schools are now familiar with.