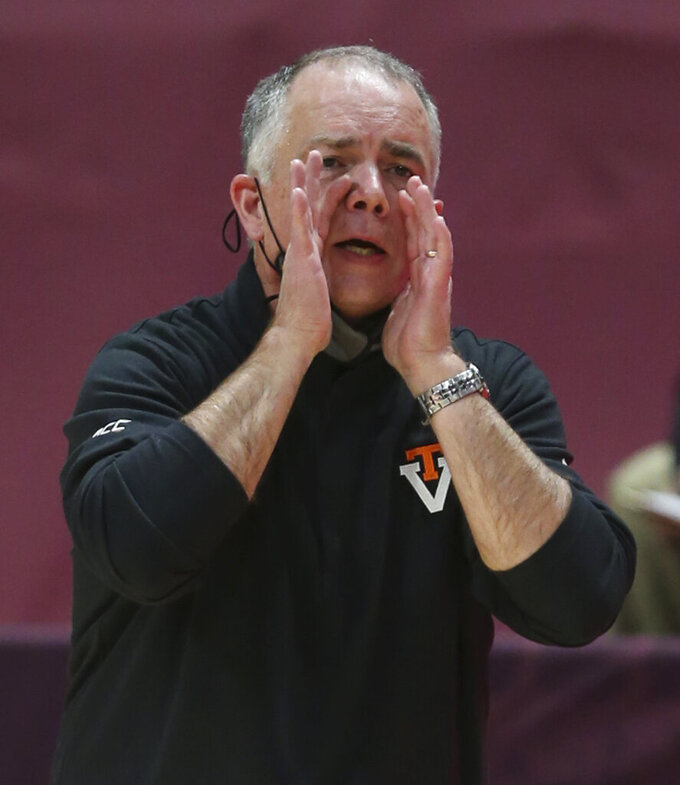 No. 23 Virginia (5-2, 1-0 ACC) hosts No. 24 Virginia Tech (8-1, 2-0) on Saturday in an in-state matchup featuring half of the conference's ranked teams. Virginia has had games against No. 12 Michigan State and Wake Forest postponed, and a matchup with No. 5 Villanova at Madison Square Garden was canceled because of the coronavirus pandemic. The Cavaliers, the preseason pick to win the conference title, rebounded after a bad loss to No. 1 Gonzaga with an impressive 66-57 victory Wednesday night over Notre Dame to improve to 12-0 in ACC openers under coach Tony Bennett. Junior point guard Kihei Clark scored 19 points for the second straight game and added five assists with zero turnovers. Junior forward Keve Aluma scored a career-high 26 points Tuesday, 19 in the first half, and matched a career best with three blocks to pace the Hokies in an 80-78 home win over Miami. The Hokies were picked in the preseason to finish 11th.

Florida State (5-2, 1-1) started the week as the highest-ranked team in the ACC at No. 18, but that's likely to change. Clemson handed FSU its second defeat of the season, 77-67, on Tuesday night, and now the Seminoles host No. 20 Duke (3-2, 1-0) on Saturday night. Waiting in the wings is erratic Syracuse (6-1, 1-0), which has been on its second long pause of the season and had ACC games against Notre Dame, Wake Forest, and North Carolina postponed because of the novel coronavirus. The Orange players are cleared to do individual workouts with their position coach, but they're still not practicing as a team as a date with the Seminoles looms at home on Wednesday. A positive test on the Buffalo Bulls after a loss in the Carrier Dome put a halt to Syracuse's season after three straight wins, two of them with the Orange scoring in triple digits. They beat Boston College 101-63 and Buffalo 107-96 in overtime with a hard-fought 62-56 win over Northeastern sandwiched in the middle. The last time Syracuse scored 100 points in games that close together was on back-to-back dates in a five-day span in December 1993 (104-75 over Lafayette and 108-71 over Maryland-Eastern Shore).

Louisville sophomore guard David Johnson was tabbed the ACC player of the week on Monday after a pair of nearly identical performances, averaging 17 points, nine rebounds and three assists in wins over Pitt and Kentucky. He was 13 of 22 (.591) from the field and 4 of 9 from behind the arc and had his first career double-double with 17 points and 11 rebounds in the Cardinals’ ACC opener at Pitt. He followed with 17 points, seven rebounds, and four assists last Saturday against rival Kentucky.

Nate Laszewski and Juwan Durham combined for 47 of Notre Dame's 57 points in Wednesday's loss to Virginia. Laszewski recorded a career-high 28 points and hit 8 of 11 from the field with four 3-pointers to go with 8 of 10 at the line, while Durham added a season-high 19 points. Laszewski is averaging 16.2 points and 8.1 rebounds, fourth in the conference. He's also shooting .662, tied for the ACC lead with Quincy Guerrier of Syracuse.

The league continues to be hit hard by coronavirus-related issues. Pitt had three games postponed following a positive COVID-19 test, subsequent quarantining, and contact tracing within the Pitt women’s program. Women's play resumed Thursday after an 11-day hiatus. Despite the stoppage, players are excelling, with 41 having recorded 20-point games this season. Louisville’s Dana Evans paces the women with 20 or more points in four games, the only ACC player to accomplish the feat.