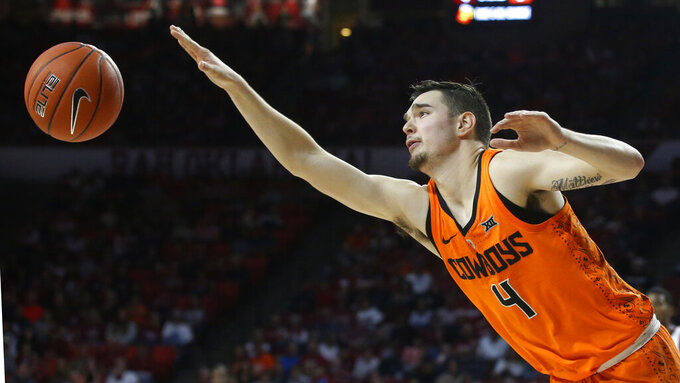 FILE - In this Jan. 5, 2019 file photo, Oklahoma State guard Thomas Dziagwa (4) reaches for the ball during an NCAA college basketball game against Oklahoma in Norman, Okla. The Cowboys have a trio of senior captains who are primed to lead the Cowboys back to prominence - Lindy Waters III, Cameron McGriff and Thomas Dziagwa. (AP Photo/Sue Ogrocki, File)

OKLAHOMA CITY (AP) — For the first time during his tenure at Oklahoma State, third-year coach Mike Boynton has continuity on his roster.

The Cowboys have a trio of senior captains who are primed to lead the Cowboys back to prominence in Lindy Waters III, Cameron McGriff and Thomas Dziagwa. They are part of the reason the Cowboys are picked to finish sixth in the Big 12, their highest preseason projection since 2013-14.

"We're going into this year with a bunch of positive energy and momentum around the program with a bunch of guys who are hungry for success," Boynton said. "We've got all five starters from last year back, and the core of it is those three seniors who've been through a ton."

The experience will play a role in how the Cowboys handle success.

"We can get a big win, knowing that we have another big game ahead of us," McGriff said. "We don't want to celebrate until it's all over."

"It's a very competitive atmosphere here," sophomore guard Isaac Likekele said. "Off the court, it's all love, but when were on the court we are going to war, and that is how it is supposed to be because when we go at each other 100 percent, that is going to make the game a lot easier for us."

The chemistry between the returnees and newcomers already has become evident.

"I think this group meshes really well together," Dziagwa said. "Even off the court, we eat lunch almost every day, Monday through Saturday, with each other. We really enjoy spending time with one another. I think that is just going to carry over when we get onto the court."

Oklahoma State could be one of the nation's top perimeter shooting teams after ranking 48th out of 351 schools last season. Dziagwa led the team with 105 3-pointers last season, Waters hit 44.8 percent of his threes and Laurent made 46.7% of his threes last season at UMass.

Forward Yor Anei, the Big 12's top shot blocker last season, is an honorable mention preseason All-Big 12 selection. The 6-foot-10 forward finished last season ranked seventh nationally in blocked shots with 2.7 per game. Over the final three games last season, he averaged 15.7 points, 8.3 rebounds and 7.0 blocks and shot 70.4% from the floor. He also lost 15 pounds of what he called bad weight in the offseason.

Likekele was a part of the gold-medal winning USA squad in the U19 FIBA World Cup this past summer and averaged 8.4 points, 5.9 rebounds, 3.1 assists and 1.7 steals. At Oklahoma State, he started every game as a freshman last season and averaged 8.7 points, 4.8 rebounds and 3.9 assists.

Oklahoma State has added new Cannen Cunningham and Erik Pastrana to the coaching staff. Boynton worked with Pastrana for three years at Stephen F. Austin. Cunningham, a former standout at SMU, spent the 2018-19 season on staff at Tulane under Mike Dunleavy Sr.

"They're both young guys; they've got a lot of energy," Boynton said. "They're both guys that are very experienced in knowing what good players look like."

The Cowboys are set to play 26 games against teams that finished in the top 100 of the 2019 KenPom rankings and 17 teams that reached the NCAA Tournament last season. The opener is at home against Oral Roberts on Nov. 6.