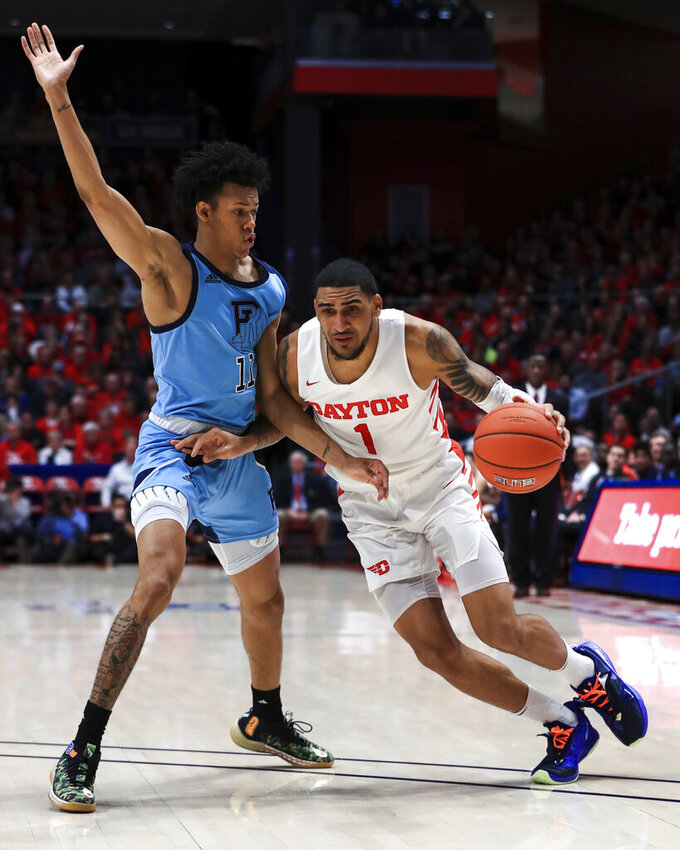 DAYTON, Ohio (AP) — Obi Toppin saw his younger brother, Jacob, going up for a shot. Dayton's fabulous forward stretch out his long arm and swatted it away.

“I wasn't going to let little brother score on me,” Toppin said. “I can't let that happen.”

He and the Flyers had things well in hand in a match-up of the Atlantic 10's top teams.

Toppin scored 22 points and led an opening 17-point spurt Tuesday night as No. 6 Dayton surged to an 81-67 victory over Rhode Island, dominating a reunion of the Toppin brothers.

Both teams brought double-digit winning streaks into a chippy game that included seven technical fouls. Dayton (22-2, 11-0) got the better of it in every way, winning its 13th in a row.

“We knew they were No. 2 in the conference and we had to put a stamp on what we have going on,” Toppin said.

Toppin had a double-double with 10 rebounds. Jalen Crutcher scored 21 points, and Trey Landers matched his career high with 14 rebounds.

The Toppin family reunion matched Obi and Jacob — a freshman reserve at Rhode Island — on a college court for the first time. Their mother, Roni, sat in the stands wearing a combo jersey, half of it Rams blue and the other half Flyers red.

“She was cheering for both of us, but I think she knew who was going to win,” Obi said.

The brothers embraced at midcourt after the anthem, a moment the two of them had eagerly awaited since the schedule came out.

Then everyone settled in to watch Obi and the Flyers take over, dominating from the start.

Toppin hit two jumpers and a breakaway, right-hand dunk during the opening 17-0 run. Crutcher made a pair of 3s during the spurt, emerging from his two-game shooting slump. Crutcher had made only 2 of his last 11 attempts from beyond the arc.

Not even a Rhode Island timeout could slow the Flyers, who made all seven of their shots during the run. By contrast, the Rams went 0 for 9 with a pair of turnovers, looking deflated as they missed one shot after another.

By the time Jacob Toppin got into the game, the Flyers led by 17 points and their fans were chanting, “Obi's better!” Jacob Toppin finished with four points.

Obi Toppin hit a 3-pointer in a closing flurry that pushed it to 49-35 at halftime, the most points the Rams have allowed in an opening half this season. He had a breakaway dunk — his brother fouled him on the play — as Dayton pushed the lead to 20 points early in the second half and was never challenged.

“A team that's by far the best team in the league,” Cox said. “They're super talented. They've got a great system. And they've got arguably the best player in the country.”

Rhode Island: The Rams' cold start cost them a chance to move into a tie with Dayton for the league lead. The Rams shot 28.8% from the field overall.

Dayton: The Flyers improved to 14-0 at home while knocking off their closest threat for the league title.

Russell leads the league in scoring at 20.3 points per game, but he missed five of his six shots in the first half and managed only two points as Dayton took control. He got a cut on the right side of his forehead early in the second half and left for treatment, returning with a large bandage.

Dayton came in leading the A-10 in 3-point shooting. Rhode Island had the league's top 3-point defense, holding opponents to 28.2%. The Flyers shot only 26.3% from beyond the arc but still won easily, shooting 53.3% overall.

Both benches got technical fouls in the first half for arguing calls. Rhode Island's Russell, Tyrese Martin and Antwan Walker also got technicals, as did Dayton's Rodney Chatman and Landers.

Dayton completed a three-game home stretch and plays the next two on the road, starting at UMass on Saturday. The Flyers beat UMass 88-60 on Jan. 11 at UD Arena.