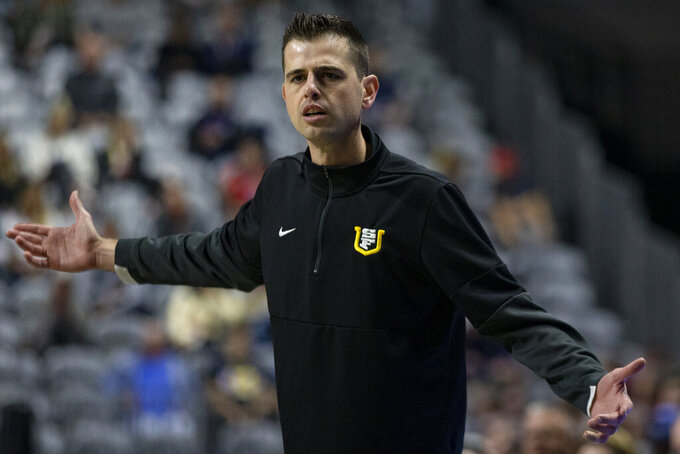 FILE - San Francisco head coach Todd Golden reacts to a referee's call during the second half of an NCAA semifinal college basketball game against Gonzaga at the West Coast Conference tournament March 7, 2022, in Las Vegas. To the core Golden knew his University of San Francisco team had done enough to earn an NCAA Tournament berth. It is just the coach had counted on a No. 9 seed and those were all gone with just four spots in the bracket remaining when the Dons were finally called. (AP Photo/Ellen Schmidt, File)

SAN FRANCISCO (AP) — At his core, Todd Golden knew his University of San Francisco team had done enough to earn an NCAA Tournament berth. It's just that the coach had counted on a No. 9 seed and those were all gone with just four spots in the bracket remaining when the Dons were finally called.

“We made history,” the elated third-year coach said, “something I’ll remember for the rest of my life.”

Tiny USF, from the same talented mid-major conference as tournament-bound rivals Gonzaga and Saint Mary's, is headed back to college basketball's big stage for the first time since 1998 after a fantastic run through the West Coast Conference. The Dons (24-9) are a 10th seed in the East Regional and set to face No. 7 Murray State (30-2) on Thursday in Indianapolis seeking their first NCAA victory since 1979. USF’s storied program dates way back to the days of winning back-to-back NCAA titles in 1955 and 1956 behind star Bill Russell.

“It’s unexplainable, just seeing our name up there it’s something I always dreamed about,” senior Khalil Shabazz said shortly after the Dons punched their ticket. “Literally seeing it become a reality, it’s still unexplainable and I’m still in shock. My hands are shaky and my heart is beating fast. It’s crazy. I'm just really happy that we made it. We're not finished.”

Everyone involved knew the kind of special season the Dons would need in order to get this far and secure an at-large bid in a conference featuring No. 1 overall seed Gonzaga and Bay Area neighbor Saint Mary's. This marks the third time in conference history the WCC has sent three teams to the NCAA Tournament, also done in 2012 and 2008.

Things got a little tough for Golden and the Dons during the selection show as USF waited — and waited. “It was stressful and surreal," Golden said. "There’s no way CBS sent cameras out here to see us not get in right?"

“This is not easy to do,” he added. “We knew how difficult the challenge was going to be when we started, all through it and even 'til a minute before we got announced. So to get rewarded that way it means everything.”

Golden has pulled together players from Australia, Belarus, Italy, England, The Netherlands, Slovenia and Ukraine to build this team, which has won with consistency and a determination to stick together, like supporting sophomore center Volodymyr Markovetskyy of Truskavets, Ukraine, as his mother and sister relocated when Russia attacked their homeland and his father stayed to work in law enforcement.

“I think (he) knows that our team is behind him in every situation that he’s in and I think it’s a very important situation to support him and his family with everything that’s going on in the world right now,” senior Jamaree Bouyea said. “It’s a credit to him for showing up every day for basketball practice and giving it his all as he has other things going on.”

Two other players made their own personal sacrifices that Golden credits for keeping this close-knit group together when they might have become disgruntled over change and fewer chances.

Dzmitry Ryuny earned honorable mention all-conference distinction last season as a junior before the forward from Belarus suffered a serious foot injury over the summer. The injury set him back nearly four months before he returned to practice a week before the opener. Once healthy, he was behind, still had to regain his stamina to get in playing shape and had to adjust to a new role.

Ryuny made a career-best 21 starts last season and averaged 9.4 points.

“He just never really got the opportunity to earn his playing time back,” Golden said. “It would have been very easy for Dmi to whine and complain and be upset with me or his teammates about his role, and to his credit, even though it was really hard to do, he swallowed his pride and always, always, always had a good attitude and put the team in front of himself.”

Australian forward Josh Kunen had been a mainstay in San Francisco's starting lineup in his first two collegiate seasons. When USF recruited some talented big men, Kunen committed to embracing his job coming off the bench.

All those unselfish details have mattered so much in the Dons' success.

With their perimeter shooting and veteran backcourt of Bouyea and Shabazz that Golden believes "can play against anybody in America," upstart USF hardly thinks this is it.

“Our guys have proven that they can play with and outperform really anybody in the country," Golden said. “To have those two guys along with our frontcourt depth and perimeter shooting, I feel like we're the type of team that can make a run.”