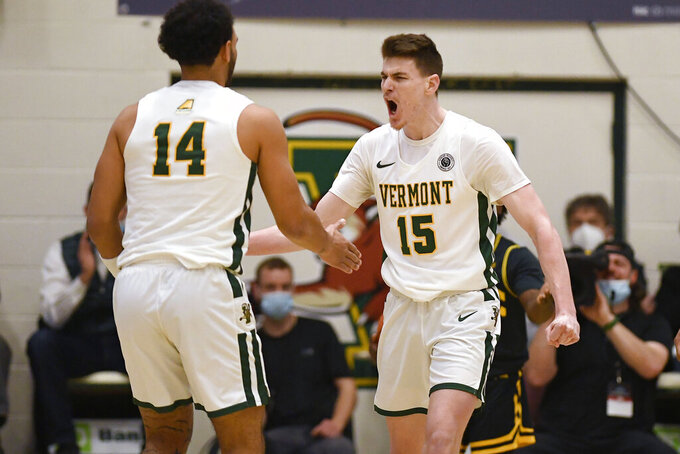 Davis, back-to-back American East player of the year, was 9-of-13 shooting and Shungu was 9 of 17 with the top-seeded Catamounts at 59%. Finn Sullivan, a University of San Diego transfer, added three 3-pointers and 14 points for the Catamounts (28-5), who crushed their tournament competition, winning by 29, 32 and 39 points.

“We can compete with any team in college basketball. I like any matchup we can get,” said Shungu, a South Burlington native who competed in his eighth championship in Patrick Gym, counting high school state tournaments and college.

Darnell Rogers had 10 points, the only player scoring in double figures for the second-seeded Retrievers (18-14), who shot just 28%.

Sullivan and Davis hit 3-pointers to cap a 12-4 run early in the second half to extend a 17-point halftime lead to 49-26. When Robin Duncan made a layup with eight minutes to go the lead passed 30 points on its way to a high of 42.

Both teams averaged 75 points a game this season but Vermont left UMBC behind early, finishing the half on a 13-4 run to lead 37-20.

UMBC’s Keondre Kennedy hit a 3-pointer to open the game but Justin Mazzulla responded with a bucket, Sullivan made a 3-pointer and Davis added a basket for a 7-0 run and the Catamounts led the rest of the way.

Vermont outscored UMBC 56-16 in the paint.

The Catamounts were in their fifth final in the last seven years, and lead the America East with nine tournament titles. This year's edition became the second Vermont team to reach 28 wins.

This was third time in five years these two programs played for the title, the Retrievers winning in 2018 and the Catamounts in 2019.

Vermont bested UMBC by a combined 44 points in two regular-season meetings on its way to taking the regular-season championship by six games over the second-place Retrievers. The Catamounts have won or shared the past six regular-season titles.