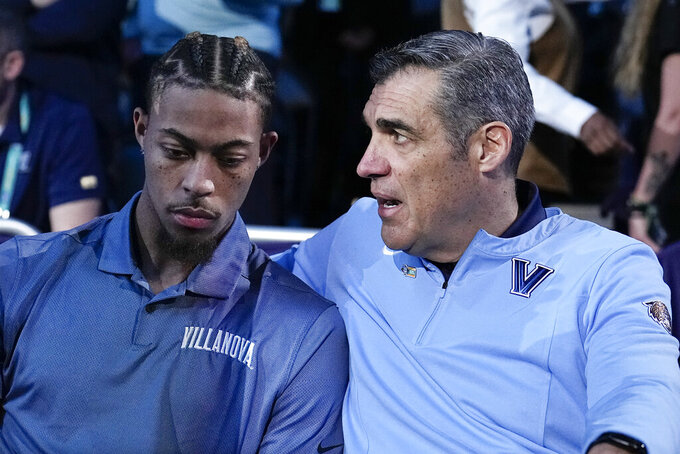 NEW ORLEANS (AP) — An enduring image of the NCAA Final Four will be Villanova coach Jay Wright sitting on the bench with his arm around injured starting guard Justin Moore shortly before tip-off of the Wildcats' semifinal matchup against Kansas.

His absence from the court was conspicuous during the first half, wh en Kansas quickly jumped out to a double-digit lead while Villanova's offense looked stagnant in an 81-65 loss.

Moore was a second-team All-Big East selection this season. The 6-foot-4 Moore averaged 34.4 minutes, 14.8 points and 4.8 rebounds per outing in 36 games. But he tore his Achilles in the final minute of Villanova’s regional final victory win over Houston last weekend.

Moore was dribbling against a defender and appeared to slip and fall. He then went back down after trying to get up.

Before the game, Moore spoke about the emotional support he's been receiving from his family, Villanova and beyond.

“It was great for me personally. I needed people by my side. I was feeling hurt and down," Moore said. "Them saying they love me and they have my back and giving encouraging words, that really helped me.”

Well-wishers have included NBA star Kevin Durant, who experienced a similar injury while playing for Golden State in 2019.

“He called me right away. He facetimed me,” Moore said. “I wasn’t expecting that. I was still a little bit off from the medicine. That, right there, kind of snapped me out of it. It was a great feeling.”

Moore also described his recollections of the moment the injury happened.

'It was really nerve-wracking and hard for me. We were winning that game and playing great basketball as a team and going into the Final Four," Moore said. "People saw me crying and stuff. It was a lot of emotions going through. I had to sit back and take it all in.

“My family was there and my teammates were there to help me. If I didn’t have them by my side, I don’t know where I’d be right now.”

North Carolina 6-foot-9 graduate transfer Brady Manek asserts that he has better jumping ability than he's given credit for and felt the last of his three blocked shots Saturday night proved it.

With his team trailing by a point, Manek, who formerly played at Oklahoma, rose up in the latter stages of the second half to block Jeremy Roach's driving floater in the lane.

Asked if that's about as high as he has ever jumped, Manek replied, “It’s funny you ask that. People don’t know it about me, but I can jump. I’ve shown it this year. I’ve got a lot of dunks.

Country singer Eric Church took considerable heat in San Antonio for postponing a sold out concert in the city on Saturday night so he could go to the Final Four instead.

Church is a North Carolina native and has been a lifelong Tar Heels fan. And he wasn't going to miss North Carolina's historic first NCAA Tournament clash against in-state rival Duke in the national semifinals.

Earlier Saturday, Church issued a public statement in which he thanked his fans in San Antonio for “letting me take my family to this game.”

“It took a minute to figure out how and when I could properly express my thanks,” Church said in the statement, who added that his way of doing so would be to hold a concert on Sept. 2 at the Whitewater Amphitheater in New Braunfels. He described it as a “one of a kind free show for those of you who bought tickets and were planning to attend our cancelled San Antonio show.”

Church traveled to New Orleans after performing on Friday night in Fort Worth in the same stadium where both North Carolina and Kansas played their opening NCAA Tournament games last month.

Villanova's 81-65 loss to Kansas in the semifinals brought to an emotional end the career of Villanova guard Collin Gillespie, whose team-high 17 points in against the Jayhawks gave him 1,858 points.

Gillespie is Villanova’s all-time leader in games played (156) and this season played in his second Final Four. He also finished his career with Gillespie is tied with 2009 Final Four participant Scottie Reynolds for eighth most assists in school history with 482.

“He’s what Villanova basketball is. And even off the court, he’s a near and dear brother to me, brother to Brandon, brother to all of us,” Wildcats guard Caleb Daniels said. “There’s just something special about him, knowing how to talk to each one of the guys, and just his leadership is valuable to us. And the things that he taught me while he was here, just something I’ll treasure forever.”

A crowd estimated at more than 70,000 in the Superdome included a number of recognizable faces.

They included former North Carolina coach Roy Williams, who shared a pre-game embrace near the court with former Tar Heel Cam Johnson, who now plays for the Phoenix Suns.

North Carolina Gov. Roy Cooper also was seen near the floor for a matchup of enormous interest in his state.

Archie Manning, a former Saints quarterback, father of Super Bowl-winning quarterbacks Peyton and Eli Manning and still a New Orleans resident, also was in attendance, as was actor Jamie Foxx.

During a timeout late in the second half, Ben and Erin Napier, stars of the HGTV show, “Home Town,” were shown on the Superdome's expansive video screens. Both studied at Ole Miss, but Ben Napier was wearing a Duke hat. The couple live in Laurel, Mississippi, about a two-hour drive northeast of New Orleans.