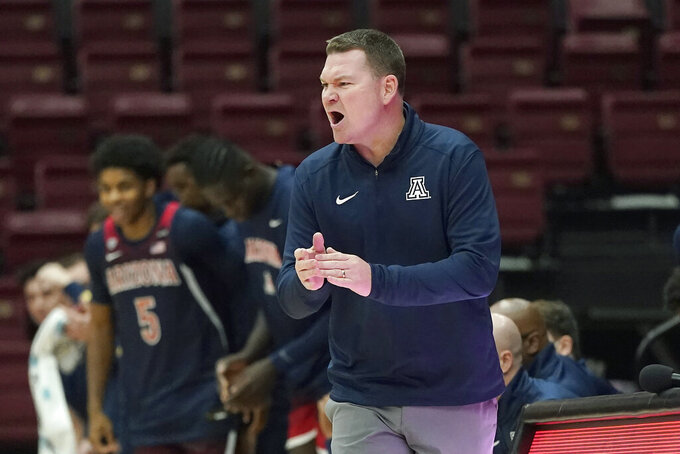 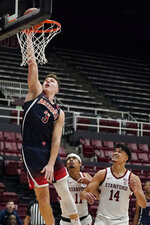 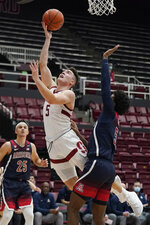 STANFORD, Calif. (AP) — Oumar Ballo had a career-high 21 points and No. 3 Arizona dominated Stanford in an 85-57 blowout Thursday night.

Arizona shot 55.4% and limited Stanford to 30% shooting, the 11th time in 16 games that the Wildcats held their opponent below 40%.

Spencer Jones and Maxime Raynaud each scored nine points to lead Stanford (10-6, 3-3), which lost for the first time in eight games this season at Maples Pavilion. Arizona has won 11 in a row on Stanford’s home floor.

The Cardinal couldn’t find their rhythm offensively and didn’t have an answer for Arizona’s size inside. Stanford was outscored 48-20 in the paint and never got closer than 11 points in the second half.

Ballo, a 7-foot redshirt sophomore from Mali, scored his 21 points in just 22 minutes off the bench.

“I’m really proud of him. He was great tonight,” Arizona coach Tommy Lloyd said. “He was a physical force on both ends of the floor. I thought he was the game-changer tonight.”

Mathurin, who entered the night second in the Pac-12 at 18 points per game, scored 13 in the first half as the Wildcats led 42-31 at the break.

“Obviously, we were beat by an excellent, excellent team tonight,” Stanford coach Jerod Haase said. “From early in the game and through the game, we were unable to answer anything they threw at us. Defensively, they pressured us and forced us into a bunch of turnovers. But even more importantly, we had no rhythm offensively.”

The Cardinal’s two leading scorers, Harrison Ingram and Jaiden Delaire, combined for just five points in the first half. Ingram, a five-star recruit from Dallas, finished with five points and Delaire had eight.

Arizona: The Wildcats seem to feed off the energy of their vocal bench, particularly on defense. With Stanford allowing only family members of players to attend home games right now due to COVID-19 guidelines, Arizona’s reserves could be heard loud and clear in the near-empty arena.

Stanford: The Cardinal learned that they can’t dig themselves an early hole and expect to climb out of it against the conference’s elite teams.

After a slow start, Stanford was turning momentum in its favor midway through the first half when it closed to 22-16. But then Arizona rattled off an 8-0 run that opened its lead to 30-16, and the Wildcats never looked back.

The sterile environment and lack of a crowd hardly provided Stanford a home-court advantage. Though Haase said there was nobody to blame for the virus-induced restrictions, he also said the difference is noticeable.

Arizona: Plays at California on Sunday, continuing a stretch of three consecutive games on the road.

Stanford: Plays at home Saturday against Arizona State, which has had three of its past six games canceled or postponed.