The Latest: Vegas tests positive ahead of PGA Tour event 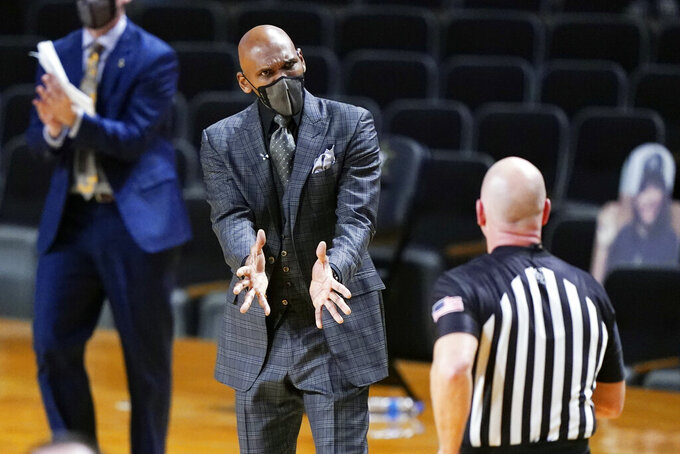 Jhonattan Vegas has tested positive for the coronavirus and withdrawn from the Sony Open in Hawaii.

Vegas is the second PGA Tour player to withdraw because of a positive test this year. Jim Herman tested positive before leaving for Hawaii for the Sentry Tournament of Champions.

Xander Schauffele and Webb Simpson both had the coronavirus over the holidays but recovered in time to play on Maui last week.

The 22nd-ranked Oregon men's basketball team has paused all team-related activities because of COVID-19 protocols.

The Ducks won’t play planned games at home against Arizona State on Thursday and Arizona on Saturday. The games will be rescheduled.

The NBA says Wednesday's game between the Utah Jazz and the Washington Wizards has been postponed because of COVID-19 protocols.

The league says because of contact tracing, the Wizards don't have the required eight available players to take the floor for their scheduled home game against the Jazz.

The Wizards said earlier Tuesday that two players had entered the league's protocols meant to curb the spread of the coronavirus, and the team canceled practice.

The postponement is the fifth in the NBA since Sunday, including three involving the Boston Celtics.

The National Hockey League says 17 of the 27 players that have tested positive for the coronavirus are on the Dallas Stars.

The league announced COVID-19 testing numbers from Dec. 30-Jan 11 on Tuesday. That included 12,000 tests administered to more than 1,200 players.

The NHL says most of the 17 Stars players are asymptomatic and all are recovering without complication. Dallas shut down its training camp Friday and resumed practices Tuesday with more than a dozen players still unavailable.

The regular season starts Wednesday. The Stars were scheduled to play their first game Thursday but will not begin now until at least Jan. 19.

The Nebraska men’s basketball game at Maryland scheduled for Saturday has been postponed because of a COVID-19 outbreak in the Cornhuskers’ program.

Nebraska announced a pause in its program on Monday because of at least one positive coronavirus test. The Huskers’ game against No. 14 Illinois on Wednesday also has been postponed.

The schools and Big Ten Conference are working on rescheduling the games.

Hours after announcing the postponement of Saturday's game against Villanova, No. 4 UConn says it also must reschedule Wednesday’s women’s basketball game against Seton Hall.

The Huskies say they are making the move as a precaution because of a coronavirus outbreak at Providence, a team the Huskies beat last weekend. The Villanova game was postponed because the Wildcats also are dealing with COVID-19 issues within their women’s basketball program.

The game between UConn (7-0, 6-0) and Seton Hall had been moved to Wednesday after the Huskies had to cancel a trip to Xavier because of coronavirus issues in the Musketeers' program.

The Huskies next scheduled game is against Butler on Jan. 19. Teams must play 13 games this season to qualify for the NCAA Tournament.

The Czech Republic has been forced to withdraw from the handball world championship in Egypt after the team was decimated by coronavirus infections.

The Czech Handball Federation said Tuesday it was impossible for the national team to participate in the Jan. 13-31 tournament after 13 of the 21 players and several coaches tested positive for the novel coronavirus.

The International Handball Federation said North Macedonia will replace the Czechs, who were scheduled to play in Group G together with host Egypt, Sweden and Chile.

The 27th edition of the handball worlds will be played without spectators.

Richmond’s men’s basketball team has paused team activities in response to the results from the latest COVID-19 testing and contact tracing.

The school says no decisions have been made related to any upcoming games for the Spiders.

The Big 12 announced Tuesday that West Virginia has postponed its next two men’s basketball home games due to COVID-19 concerns.

The announcement came a day after the 13th-ranked Mountaineers called off their game Tuesday night at No. 2 Baylor.

West Virginia said it will work with the Big 12 and the other schools to reschedule the games.

The Atlantic Coast Conference announced Tuesday that the Syracuse women’s basketball game at Georgia Tech on Thursday has been postponed.

Additionally, Syracuse’s home game against North Carolina, originally scheduled for Dec. 31, has been rescheduled for next Tuesday.

No. 24 Syracuse remains on pause and in COVID-19 protocols after a positive test within the program. The Orange women are scheduled to return to the court at home against Miami on Sunday.

The ACC also said three other women's games have been postponed — Florida State at Miami and Virginia at North Carolina State scheduled for Thursday, and Georgia Tech at Virginia on Sunday.

The revised schedule calls for Virginia Tech to host N.C. State and Louisville to host North Carolina on Jan. 28, Florida State to visit Wake Forest on Feb. 2 and Miami to host Florida State on Feb. 7. Boston College at Pitt has been rescheduled for Feb. 16.

The previous week a season-high 34 players tested positive along with 36 other personnel.

Since monitoring began at the beginning of last August, nearly 940,000 tests have been given and 259 players and 454 other personnel were confirmed positive.

Those who test positive for COVID-19 follow the league protocol and are immediately isolated, not permitted to access club facilities, or to have direct contact with players or personnel. Club medical staff are in regular communication with individuals who test positive to monitor symptoms.

The Air Force hockey team has paused all activities for the next 14 days due to COVID-19 cases within the program. The team’s next two series, Friday and Saturday against Army and the following weekend against Long Island University, have been postponed.

No make-up dates have been announced. Air Force is working with Atlantic Hockey on rescheduling possibilities.

The Southeastern Conference has postponed Tuesday night’s basketball game between in-state rivals No. 10 Tennessee and Vanderbilt because of a combination of positive coronavirus tests, contact tracing and quarantining within the Commodores’ program.

The game was a late addition to the schedule because of COVID-19 issues at Missouri, where Vanderbilt had been scheduled to play, and at South Carolina, Tennessee’s originally scheduled opponent. The SEC moved up Tennessee’s previously scheduled trip to Vanderbilt from Feb. 24 to Tuesday night for a rare home-and-home between the rivals in back-to-back games.

Vanderbilt is still set to visit Tennessee on Saturday night as originally scheduled.

The women’s basketball game between No. 4 UConn and Villanova, which had been scheduled for Saturday, has been postponed.

Villanova women’s basketball is on pause due to COVID-19 issues within the program. The Wildcats (8-2, 3-2 Big East) also have postponed home games scheduled for Wednesday against Providence and on Jan. 20 against DePaul. No makeup dates have been announced.

UConn (7-0, 6-0) is scheduled to host Seton Hall on Wednesday, a game that was moved after the Huskies had to cancel a trip to Xavier because of coronavirus issues in the Musketeers program.

Manager Pep Guardiola has confirmed Sergio Aguero is not available for Manchester City's match against Brighton in the English Premier League on Wednesday.

The Argentina striker missed the FA Cup third-round win over Birmingham on Sunday after being asked to isolate as a close contact of someone who has tested positive for COVID-19.

“Quarantine, isolated — the rules. After nine or 10 days he will be back,” Guardiola said at a news conference.

It is yet another setback for Aguero, whose return from knee surgery this season has already been complicated by further pain in the joint and a hamstring injury.

Aguero has not started a game since October but had been expected to feature last weekend.