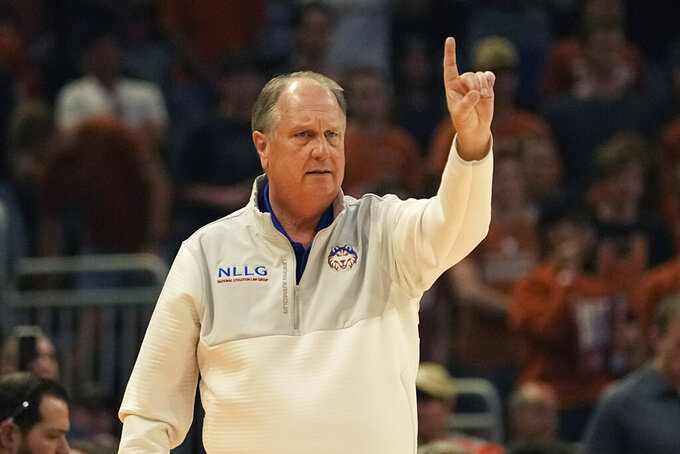 Houston Christian head coach Ron Cottrell signals to his players during the first half of an NCAA college basketball game against Texas, Thursday, Nov. 10, 2022, in Austin, Texas. (AP Photo/Eric Gay)

Lee was killed last June in a shooting in his hometown of New York City. Eight others were wounded during the Father's Day gathering.

Lee, a 21-year-old senior who had been set to graduate in December, led the team in scoring and rebounding last season when it was known as Houston Baptist. He was the school's Male Student-Athlete of the Year, finished sixth in the nation in steals per game and was a second team All-Southland Conference selection.

The Longhorns came onto the court for warmups wearing shirts in Texas school colors with Lee's name and his No. 23. Texas players then gave the shirts to Houston Christian players.

“To see them do that was really special,” Houston Christian coach Ron Cottrell said. “We’re seeing too much around the country right now with people losing friends and family and teammates to gun violence. It’s hard to put into words the emotion we’ve gone through.”

Texas coach Chris Beard praised his players for coming up with the idea.