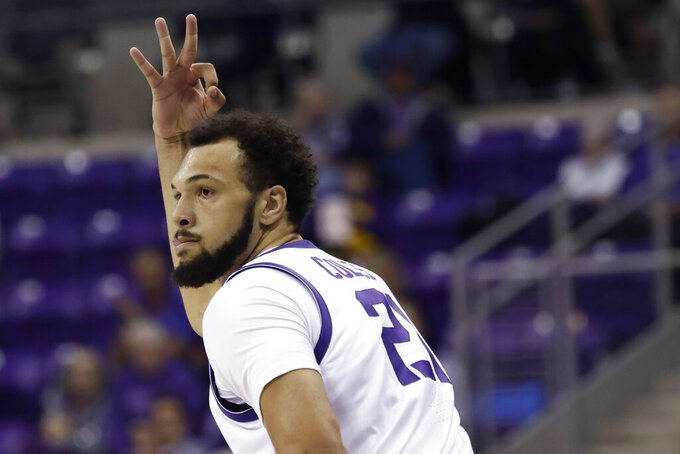 TCU forward JaKobe Coles reacts after scoring a 3-point basket against Louisiana-Monroe during the first half of an NCAA college basketball game Thursday, Nov. 17, 2022, in Fort Worth, Texas. (AP Photo/Ron Jenkins) 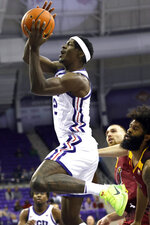 “A lot more talented than us and playing on their A-game,” Louisiana-Monroe coach Keith Richard said. “They didn’t play this well the other night. ... I saw the worst of them on film and the best of them here live.”

The Frogs (3-1) scored the game's first five points and never trailed three nights after a 64-63 home loss to Northwestern State, another Louisiana squad.

Things got a bit testy at the end of the first half, after Frogs forward Chuck O’Bannon was ejected because of a flagrant foul.

O’Bannon had his elbow near the neck of Savion Gallion when the Warhawks guard was shoved to the floor and his head hit the knee of another TCU player in the final second of the first half. O’Bannon was ejected and Gallion made the second of his free throw attempts for a 53-26 halftime score, but his coach held him out the second half.

As the teams exited the court through the single tunnel, coaches had to get between the teams and referees blew whistles to restore order after some jawing between some of the players.

Micah Peavy added 12 points for TCU and O’Bannon had 11 in the first half.

Shahada Wells made a 3-pointer and a layup in the opening minute of the game for TCU, both on assists from Rondell Walker. The Frogs had a 10-point lead before the first media timeout, and led 34-14 on a layup by Coles midway through the first half.

“Excited about how the ball moved early on ... we got some transition. We saw the shots go down early, which we haven’t done that in a while,” TCU coach Jamie Dixon said. "I think it just got everything going for us.”

The Frogs played their second game in a row without Big 12 preseason player of the year Mike Miles because of a left foot injury. Dixon said he should be back for their next game. They are also still without returning starting guard Damion Baugh, who has two more games left in a six-game NCAA suspension for briefly signing with an agent after last season.

Louisiana-Monroe: The Warhawks, with only one returning starter and six transfers, were coming off back-to-back games with seven players scoring in double figures. But those 52- and 49-point wins were at home against small schools Dallas Christian and Central Baptist. They had opened the season with a 33-point loss at Texas A&M.

TCU: The Frogs, who last season got their first NCAA Tournament win in 35 years, shot 53.1 % (34 of 64) from the field and 50% on 3-pointers (10 of 20) to wrap up their season-opening four-game homestand. TCU trailed by 20 points in the first half of its opener and won 73-72 only after Arkansas-Pine Bluff missed a game-ending shot, then struggled to put away Lamar in their second game.

“Everybody's going to look at our previous games, and I’ve told our guys we’ve got to own it, but there’s plenty of games left,” Dixon said. “Some people may have given up on us, but then they look at what happened and see the situation.”

The game was the campus portion of the Emerald Coast Classic for both teams. The event wraps up next week in Niceville, Florida, with two days of games after Thanksgiving.

Louisiana-Monroe will travel just more than 30 miles from its campus to play at Louisiana Tech on Monday night.

TCU hits the road for the first time this season to play California the day after Thanksgiving in the Emerald Coast Classic.