No. 9 Duke's trip to Louisville headlines ACC's week ahead 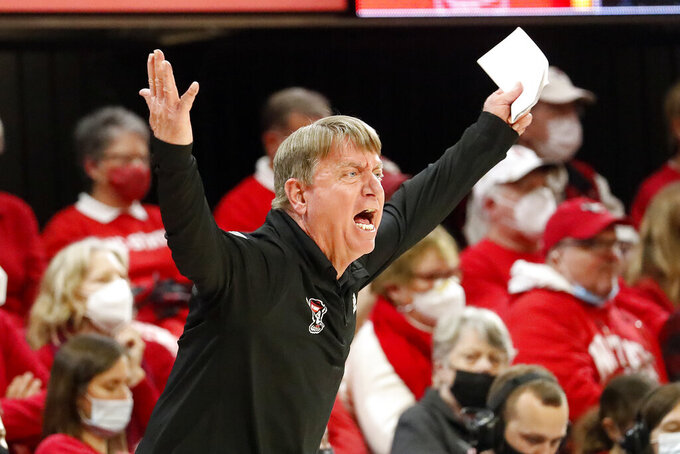 No. 9 Duke at Louisville. The Blue Devils (16-3, 6-2) remain the league’s only AP Top 25 team and now they’re headed to an unusual circumstance by facing a team fresh off a midseason coaching change. Assistant Mike Pegues will act as the interim coach for the Cardinals (11-9, 5-5) after the school and head coach Chris Mack announced Wednesday they had agreed to part ways.

Pegues led the team to a 5-1 start while Mack was sidelined by a six-game school suspension, but his team is reeling by losing five of six entering a matchup with Mike Krzyzewski’s Blue Devils led by freshman star Paolo Banchero (17.9 points).

The Blue Devils visit Notre Dame on Monday in a light schedule to start next week, with the Fighting Irish (13-6, 6-2) sitting near the top of the league standings by carrying a three-game winning streak into Saturday’s visit from Virginia.

Oklahoma transfer Alondes Williams has been an immediate star for second-year Wake Forest coach Steve Forbes. The 6-foot-5 graduate is leading the league in scoring at 20.4 points, including consecutive games of 25 points against both Syracuse and Duke this month. He’ll lead the Demon Deacons (17-4, 6-3) in Saturday's visit to the Orange.

Third-ranked North Carolina State’s home win against No. 5 Louisville on Jan. 20 has given the preseason league favorite Wolfpack firm control of the league race.

With only one head-to-head matchup on the schedule, N.C. State (18-2, 9-0) owns the tiebreaker on the Cardinals (17-2, 7-1). The Wolfpack won last year’s lone regular-season meeting, but the Cardinals earned the regular-season title by percentage points after teams played unequal numbers of games last season amid COVID-19 postponements and cancellations.

N.C. State went on to beat Louisville in the championship game of the league tournament for a second straight title. Wes Moore’s club is now trying to win the regular-season race for the first time since the 1989-90 season.