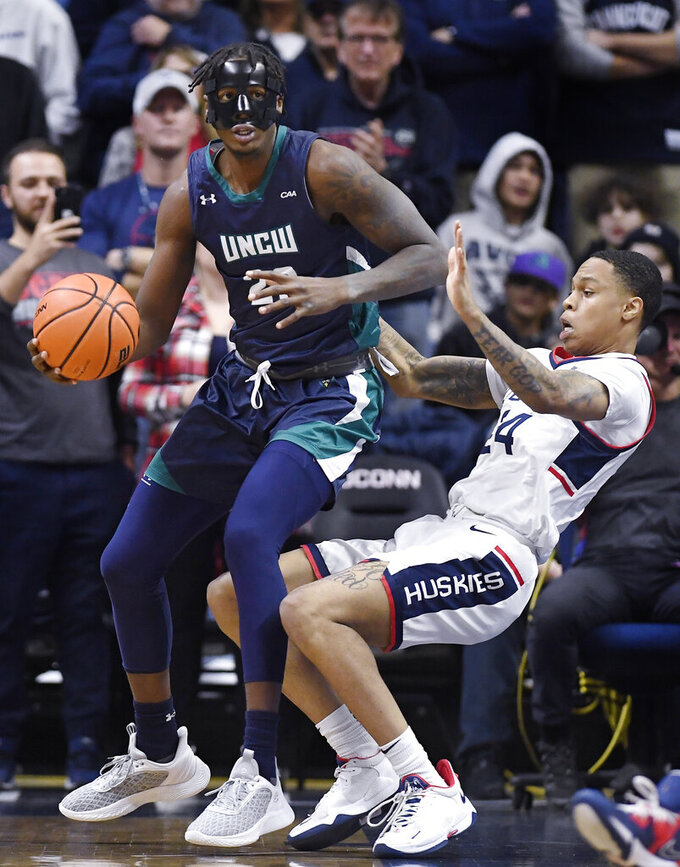 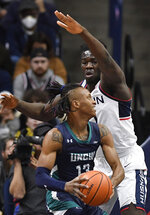 STORRS, Conn. (AP) — Junior Adama Sanogo scored 24 points to lead No. 25 UConn to an 86-50 victory over UNC-Wilmington on Friday night.

Sophomore Jordan Hawkins returned from concussion protocol to add a career-high 20 points for the unbeaten Huskies (4-0). Hawkins was 5 of 8 on 3-pointers. Freshman Alex Karaban finished with 12 points.

“It just felt good to play basketball again,” said Hawkins, who also missed postseason play last year with the Huskies due to a concussion. “There’s been ups and downs this last year, but when I got back on the court it felt great.”

The Seahawks (1-3) were led by Shykeim Phillips and Jamarii Thomas, who each had 16 points.

The Huskies led 40-28 at the half with 17 points coming from Sanogo and 11 from Hawkins. After battling foul trouble and scoring a season-low 11 points against Buffalo, Sanogo was dominant inside, hitting 6 of 9 shots in the half and 8 for 12 overall, with two misses coming on 3-pointers.

“He did what he was supposed to do today and he played great,” UConn coach Dan Hurley said. “Obviously, the other night he was disappointed in his performance.”

Hawkins returned to the lineup after missing two games with a concussion, which he suffered in the season opener against Stonehill. The sophomore went 3 for 3 on 3-pointers in the opening half and scored six of the Huskies’ final nine points on a trey and a three-point play.

The second half was all UConn, which outscored the Seahawks 26-6 in the opening 10 minutes to take a commanding 32-point lead, 66-34.

“I thought we were good and then they kind of blew it open at the end of the first half,” UNC-Wilmington coach Takayo Siddle said. “In the middle of the second half they blew it open even more, but we fought the whole game.”

UNC-Wilmington has struggled against top-tier programs early in the season, but the schedule gets a bit easier from here.

UConn continues to roll along against mid-major programs as it builds some momentum going into the Phil Knight Invitational next week in Portland.

The Seahawks wrapped up their two-game road trip and will host Mount Olive on Monday before heading to The Bahamas for the Baha Mar Hoops.

The Huskies closeout a five-game home stand with Delaware State on Sunday in Hartford.