An advanced-stats look at this year's Final Four teams 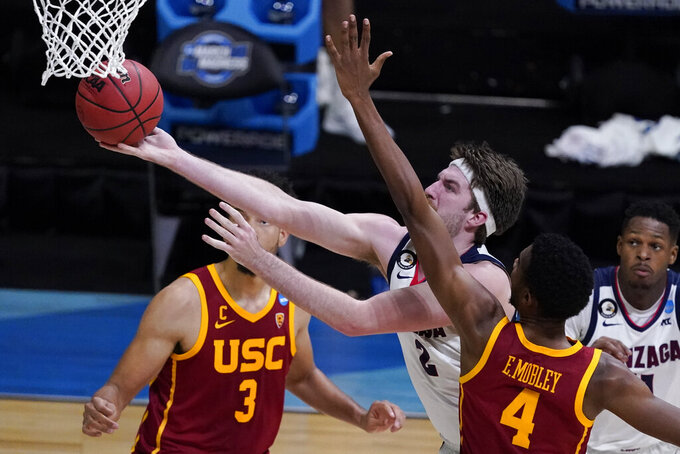 Gonzaga forward Drew Timme drives to the basket ahead of Southern California forward Evan Mobley (4) during the second half of an Elite 8 game in the NCAA men's college basketball tournament at Lucas Oil Stadium, Tuesday, March 30, 2021, in Indianapolis. (AP Photo/Darron Cummings)

Gonzaga and Baylor breezed through their regions without much difficulty. Houston played four double-digit seeds but was still tested in a couple close games. UCLA started in the First Four and needed overtime just to advance from that — but the Bruins have kept winning ever since.

The participants in this year's Final Four took different roads to get to this point, and they also have different statistical profiles. Here's a look at some of their strengths and weakness, using advanced stats. Many of the stats cited in this piece can be found at kenpom.com and are becoming more and more common in mainstream basketball analysis.

Strengths: Much has already been made of Gonzaga's 2-point field goal percentage, which leads the nation. The Bulldogs are shooting 63.7% inside the arc. They understandably don't rely too much on 3s, but they make those at a solid clip of 37.1%. That's enough for Gonzaga to rank No. 1 in the nation in adjusted offensive efficiency.

Weaknesses: It's hard to find many on a team that has won all but one of its games by double figures, but on defense, Gonzaga's block percentage ranks 262nd in the country. Rim protection could be an issue if an opponent can attack the basket against the Bulldogs.

In This Tournament: The Elite Eight was supposed to be strength against strength — Gonzaga's 2-point offense against Southern California's excellent 2-point defense. Instead, the Bulldogs picked the Trojans apart and shot 58% from inside the arc. Gonzaga was even better in its previous game against Creighton, shooting 76% on 2s.

Strengths: Baylor has made 3-pointers at a best-in-the-nation clip of 41.1%. The Bears are also good on the offensive boards (seventh in the country in offensive rebounding percentage) and their defense is No. 3 in turnover percentage.

Weaknesses: While Baylor is good at creating extra opportunities via offensive rebounds and turnovers, the Bears are ranked 273rd in defensive rebounding percentage. That could be an issue when they go up against Houston.

Strengths: The Cougars have a strength that lines up nicely with Baylor's weakness — Houston is No. 2 in the nation in offensive rebounding percentage. Also, Houston's defense is No. 1 in effective field goal percentage allowed. Teams have shot poorly against the Cougars from both inside and outside the arc.

Weaknesses: Houston's defense ranks 332nd in free throw rate, meaning the Cougars put opponents on the line quite a bit. That hasn't hurt their overall defensive efficiency that much, but it's certainly a vulnerability.

Strengths: There's nothing spectacular about the 11th-seeded Bruins, but they usually don't beat themselves. Their offense has the 29th-best turnover percentage in the country, and that ability to take care of the ball has served them well lately.

Weaknesses: While UCLA doesn't turn the ball over much, the Bruins haven't forced that many giveaways this season. Their defense ranks 252nd in turnover percentage.

In This Tournament: If the expectation for UCLA games is a low amount of turnovers on both sides, that hasn't always come to fruition in the tourney. The Bruins have committed only 36 turnovers in their five NCAA Tournament games, but they've forced 59, including 14 in each of the past two games. Also of note: Alabama and Michigan combined to go 17 of 36 on free throws against UCLA, so the Bruins were fortunate in that regard.