Bryant loves Peter Kiss when he's going off, or lipping off 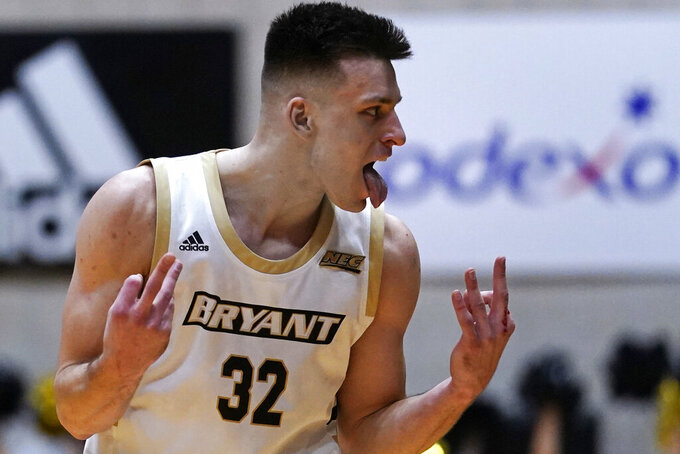 Casual college basketball fans and those who only tune in for the NCAA Tournament are about to be introduced to one of this season's great love him-or-hate him players.

Peter Kiss of Bryant not only has a great name but also is averaging 25.1 points per game to lead the nation.

Kiss and the Bulldogs will meet Wright State in an NCAA Tournament play-in game in Dayton, Ohio, on Wednesday. The winner advances to face Arizona, seeded No. 1 in the West Region, in San Diego on Friday.

The Bulldogs from Smithfield, Rhode Island, are in the tournament for the first time as a Division I member, largely because of Kiss.

Kiss thrives on competition and getting under the opponent's skin. He was suspended two games in February for his conduct in a game against Long Island that was marred by 12 technical fouls and four ejections.

His big personality was on full display during the Northeast Conference championship game against Wagner last week. On a driving layup, he dropped to the floor and did a couple pushups before getting up. He made a 3-pointer, held up three fingers and stuck out his tongue. He did a raise-the-roof motion with his arms after a dunk. He trash talks opponents and debates calls and no-calls with officials.

A sixth-year player from New York, Kiss is playing for his third college. He spent one year at Quinnipiac and three at Rutgers. He moved to Bryant last season.

His high school coach at Notre Dame Prep in Massachusetts, Ryan Hurd, sized up Kiss this way in a tweet:

“The great part about Peter Kiss is that he’s as nice as they come off the court. Probably be a great baby-sitter. You just have to make sure your kid doesn’t start talking (trash) and challenging him to 1v1 games in the yard. That might be a problem!!”

Loyola of Chicago is back in the tournament, and so is Sister Jean.

Sister Jean Dolores Schmidt, the lovable team chaplain and superfan, was introduced to America during the Ramblers’ improbable run to the 2018 Final Four. She was perhaps the most recognizable face of that year’s tournament.

Last year, she was with the Ramblers in the Indianapolis bubble and correctly predicted their upset of Illinois to go to the Sweet 16.

Now 102, Sister Jean attended Loyola’s Missouri Valley Conference Tournament opener in St. Louis and got a shout-out from first-year coach Drew Valentine as the Ramblers cut down the nets after winning the championship March 6. Loyola is making back-to-back tournament appearances for the first time since 1963-64.

“Hey, for Sister Jean!” Valentine declared as he stood on the ladder holding up a strand of the net.

Valentine was an assistant to former coach Porter Moser in 2018 and has embraced the spirit she brings to the team.

“She’s such a positive role model for the community,” Valentine said. “Honestly, an icon. We love Sister. She’s a great supporter a great friend of the program, and it’s been awesome to watch her blossom into the international superstar that she is.”

Among the six major basketball conferences, none has gone longer without a national title than the Pac-12.

Arizona again is the conference’s best hope, earning the No. 1 seed in the South and opening Friday against the Wright State-Bryant winner. The Pac-12′s other entries are UCLA, No. 4 in the East, and Southern California, No. 7 in the Midwest.

Kevin Nickelberry will be making his debut as LSU’s head coach in the NCAA Tournament. Nickelberry was named interim coach Saturday after LSU fired Will Wade amid an NCAA investigation.

“This team was obviously heartbroken (by Wade's firing), but these guys are resilient,” Nickelberry said on Sunday night. “They’ve earned the right to be here, and I think they’ll do an unbelievable job representing the university even in a unique situation, but more importantly, a special opportunity.

"We don’t have to make a lot of changes for a team that’s won a lot of games,” he added.

LSU would love to see him follow the lead of Steve Fisher, who led Michigan to the 1989 title as an interim coach. Bo Schembechler, Michigan’s athletic director at the time, fired Bill Frieder and promoted Fisher after reports surfaced that Frieder had agreed to take over Arizona State’s program.

One of the most well-traveled players in the college game is back in the tournament, this time for New Mexico State, his fifth school.

Teddy Allen played in two tournament games in his only year at West Virginia (2018). He transferred to Wichita State but never played a game for the Shockers. From there he went to Western Nebraska Community College. Then it was on to Nebraska, where he quit late last season.

Allen landed at New Mexico State and swept player and newcomer of the year honors in the Western Athletic Conference, averaging a league-best 19.3 points per game. The No. 12 Aggies play No. 5 Connecticut in Buffalo, New York, on Thursday.