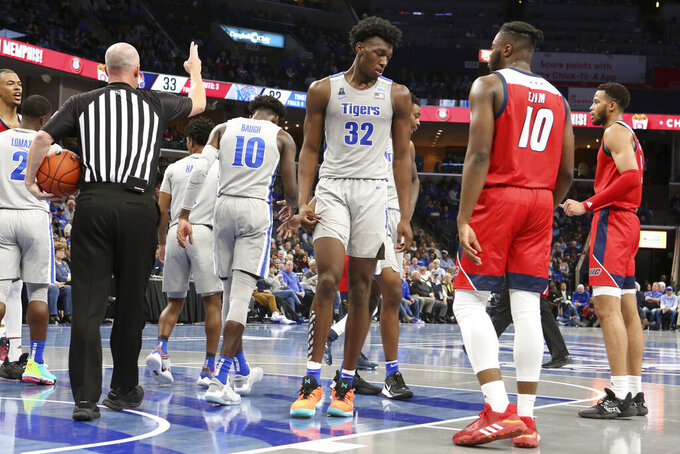 Memphis' James Wiseman (32) take his position on the floor during the second half of an NCAA college basketball game against Illinois-Chicago, Friday, Nov. 8, 2019, in Memphis, Tenn. (AP Photo/Karen Pulfer Focht) 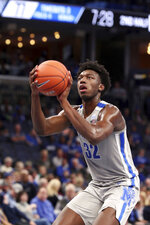 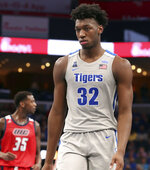 MEMPHIS, Tenn. (AP) — The feel-good season for No. 14 Memphis plunged into uncertainty Friday after the school said second-year coach and former NBA star Penny Hardaway gave more than $11,000 to the family of top prospect James Wiseman, who got a court order allowing him to play while the university tries to restore his NCAA eligibility.

Memphis issued an extraordinary statement less than an hour before the Tigers played Illinois-Chicago at home, saying Wiseman was going to be kept out of games based on interpretation of a rule by the NCAA until the temporary restraining order obtained by Wiseman's attorney Leslie Ballin late Friday afternoon.

"The University is currently working with the NCAA staff to restore his playing status, and we are hopeful for a speedy resolution to the matter," the statement said.

The 7-foot-1 Wiseman was on the court Friday night for the national anthem and introduced with the starting lineup. Wiseman scored 17 points, grabbed nine rebounds and had five blocks in a 92-46 win.

Hardaway declined to take questions on the NCAA and legal issues after the game. The coach also made clear that Wiseman will continue to play, at least until a Nov. 18 hearing, and liked how the freshman handled a roller-coaster day.

"I'm sure he was a little nervous, but he went out there and played his heart out, had five blocks in the first half ...," Hardaway said. "To me, he was still business as usual."

The NCAA declined to comment after Ballin announced that Wiseman had been ruled ineligible at a late afternoon news conference in Memphis. But the NCAA tweeted out a statement Friday night with Wiseman playing.

"The University of Memphis was notified that James Wiseman is likely ineligible," the NCAA wrote on Twitter. "The university chose to play him and ultimately is responsible for ensuring its student-athletes are eligible to play."

"Particularly given the unique circumstances in this case, we are hopeful for a fair and equitable resolution on James' eligibility," Rudd said.

Memphis said Wiseman — the potential No. 1 pick in the NBA draft next June — was declared eligible by the NCAA in May but further details and investigation by the university and the NCAA found Hardaway gave $11,500 in moving expenses to help Wiseman's family move from Nashville to Memphis in the summer of 2017.

The university said Wiseman didn't know about the money given to his family.

At the time, Hardaway was the coach of East High School. Wiseman was a standout junior, helping Hardaway win his third straight Tennessee Class AAA title before being hired by Memphis as head coach at his alma mater in March 2018.

Wiseman committed to Memphis and Hardaway again in November 2018, the top player in what wound up the nation's No. 1 recruiting class for Hardaway.

Now Wiseman is suing both the NCAA and the University of Memphis.

His attorney said Memphis received a letter Tuesday from the NCAA declaring Wiseman ineligible, which stems originally from Hardaway's $1 million donation to the university's Sports Hall of Fame in 2008. That made Hardaway a booster in 2017 when he gave money to Wiseman's family, which is impermissible under NCAA rules.

The lawsuit argues Hardaway's financial assistance to Wiseman's mother was shared with the NCAA before he was declared eligible earlier this year only to now change that ruling.

The freshman did not play in either of Memphis' exhibition games with a right ankle injury. But he scored 28 points and had 11 rebounds Tuesday night in a 97-64 win over South Carolina State.

New athletic director Laird Veatch says Memphis will cooperate and be respectful and professional dealing with the NCAA while "availing ourselves of every resource" in the best interests of their student-athletes, coach and university.

"It is clear to me in my short time here that Memphians will stand up and fight, both for each other and for what is right, and I am proud to stand with them," Veatch said.

Memphis had its 2007-08 season vacated by the NCAA, which included a national runner-up finish and a school-record 38 wins, when Derrick Rose was declared academically ineligible.