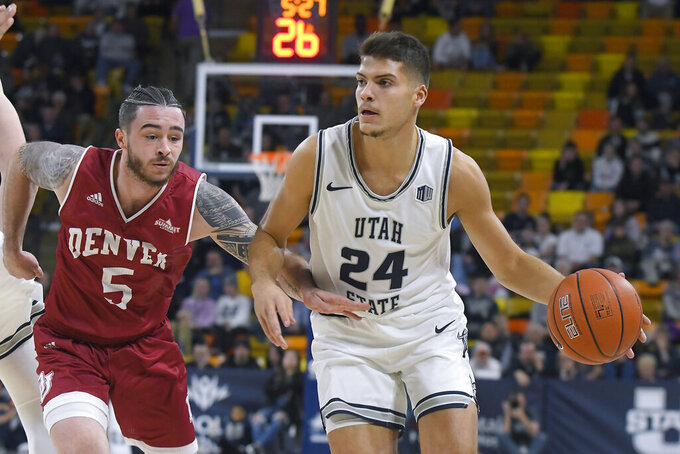 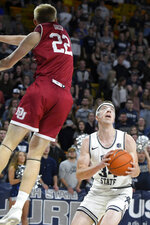 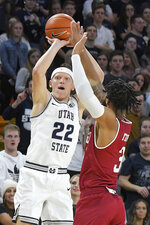 "These guys were able to find open looks for me, wide open. All of us were able to share the ball with each other and get it going early," Miller said.

The sophomore guard had four rebounds and three assists to go with his good shooting night.

"Brock's not afraid to rise and fire. I thought tonight he just did a really good job of letting the game come to him," Utah State head coach Craig Smith said.

Utah State turned in its best offensive night of the year, scoring a season-high 97 points. The Aggies shot 47.8% from the field and 46.7% from 3-point range. Utah State snagged 17 offensive rebounds and scored 16 second-chance points.

The Aggies jumped out to a 18-5 lead over the first five minutes. Miller was feeling it early, scoring Utah State's first eight points with two 3-pointers and a jumper. The Aggies stretched their lead to 31-7 with 11 minutes remaining in the first half after an Anderson 3-pointer.

During the opening nine minutes of the game, the Aggies were especially stingy on defense. After David Nzekwesi scored Denver's first three points on the game 45 seconds into the contest on a three-point play, Utah State allowed just four points over the next eight minutes. Over that time, the Aggies went on a 28-4 run. Utah State's defense forced Denver to 36% shooting from the field and just 13% from beyond the arc. The Aggies also forced six turnovers in the first half.

Utah State's defense was equally as good after the halftime break, holding Denver to just five points in the first seven minutes of the final half.

POLL WATCH: Utah State remained at the No. 17 spot in the Associated Press poll after starting the season 2-0 with an 81-73 win against Montana State to open the season and an 89-34 route against in-state school Weber State. The No. 17 ranking the third-highest AP ranking in school history and the Aggies' highest ranking since the 1970-71 season.

Utah State: The Aggies improve to 3-0 on the season with another win at the Dee Glen Smith Spectrum. Utah State again played without sophomore center Neemias Queta as he continues to recover from a knee injury. Starting in his place was Kuba Karwowski.

Denver: The Pioneers, coming off of a 74-62 win against WAC school Utah Valley University, fell to 1-2 on the season. Utah State held Denver to season lows in points scored, field goal percentage and 3-point percentage.

Utah State: The Aggies continue a seven-game homestand to open the season, taking on North Carolina A&T at the Dee Glen Smith Spectrum on Friday.

Denver: The Pioneers head back home to play Western Colorado on Saturday at the Hamilton Gymnasium.