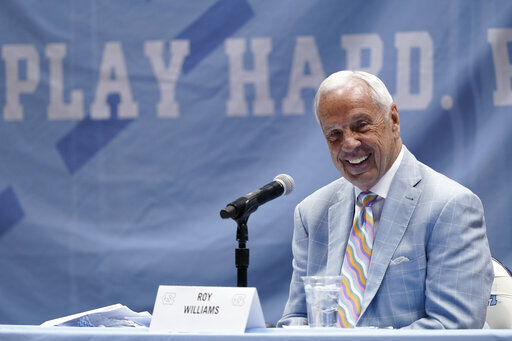 North Carolina Head Basketball Coach Roy Williams speaks with members of the media during a news conference, Thursday, April 1, 2021, in Chapel Hill, N.C. Williams is retiring after 33 seasons and 903 wins as a college basketball head coach. The Hall of Fame coach led the University of North Carolina to three NCAA championships in 18 seasons as head coach of the Tar Heels. (AP Photo/Gerry Broome)

The Hall of Fame coach is retiring from the Tar Heels’ storied men’s basketball program, opening the job for the first time in nearly two decades. That leaves athletics director Bubba Cunningham directing the highest-profile coaching search of his nearly decade-long tenure at UNC, with Williams set to have at least some input.

“I believe we’ve got the best job in college basketball,” Cunningham said. “This job doesn’t come open very often. We need to spend a great deal of time thinking about who is the right person right now.”

Williams announced his retirement Thursday, saying he no longer felt like “the right man” for the job over the past two difficult seasons. That ends an 18-season run that included three NCAA titles since he returned to his alma mater after a 15-year run at Kansas.

In a virtual news conference Thursday night, Cunningham said he and chancellor Kevin Guskiewicz would handle the process instead of using a search committee. He said he has sought input from a numerous former players as well as Williams, who Cunningham said had already shared his opinion.

Williams mentioned that, too, during his news conference earlier Thursday.

“I’m putting a lot of load on he and the chancellor’s shoulders because I’m giving my opinion very strongly about what I want to happen with the program,” Williams said.

Cunningham said he prefers head-coaching experience but it isn't required. The same is true of hiring someone with UNC ties, which worked with longtime assistant Bill Guthridge taking over after Dean Smith's 1997 retirement and Williams’ return in 2003 – but didn’t work during the tumultuous tenure of Matt Doherty after Williams turned turned down the job following Guthridge's retirement in 2000.

There are experienced coaches with strong program connections, such as UNC Greensboro's Wes Miller, who played on Williams' 2005 NCAA championship team; Stanford's Jerod Haase, who coached under Williams at UNC; and Hubert Davis, who played for Dean Smith and has spent the past nine seasons on Williams' staff.

“The history and tradition here is winning,” Cunningham said. “We’ve had it in the family for a long period of time. That is important. But it’s not the only factor in trying to make a decision like this.”

Cunningham said there is no specific timetable, though he noted UNC moved quickly in hiring Mack Brown for a second stint as football coach after firing Larry Fedora in a process taking only a few days in November 2018. He mentioned an urgency for a new coach to deal with large numbers of college players pursuing transfers, a list that includes UNC freshman 7-footer Walker Kessler.

“It’s going to be a very different environment in coaching, recruiting and retaining students to play on the team,” Cunningham said. “And quite frankly, college basketball is better when North Carolina is good. We need to be good and we’re committed to being good. And now we have to find the right leader that can maintain the standards that we’ve become accustomed to.”