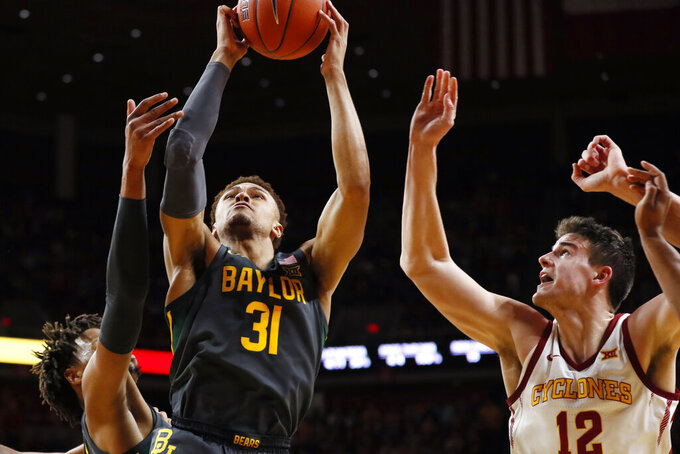 But those once-rare victories at Iowa State are now becoming routine.

MaCio Teague scored 15 points and the top-ranked Bears (18-1, 7-0 Big 12) seized control in the second half and rolled to a 67-53 win over the Cyclones on Wednesday night.

“Our team knows how tough it is to play here and what great fans Iowa State has,” said Drew, whose team has won four of the past six games against Iowa State in Ames. “Offensively, if transition and 3s are falling, it's not a good environment to be in if you're the visiting team. Really credit our guys for doing a good job trying to make things as difficult as possible, trying to not let them get the runs they have normally here.”

Baylor's trademark toughness on defense, coupled with a balanced offense, forms a potent blend that helps explain why it is the top-ranked team in the country for the third time in school history.

The Bears are 7-0 to begin conference play for the first time since the 1958 team started 10-0 in the Southwest Conference.

“I think the biggest thing is probably chemistry,” said Freddie Gillespie, who had 12 points and nine rebounds. “Coach has done a great bringing together guys with similar values. Good work ethic. And I think you're seeing hours and hours in the gym coming out and playing on the big stage.”

The Bears — the only team in the country with five wins against AP Top 25 opponents this season — used a 17-2 run midway through the second half to turn a five-point lead into a 59-41 edge with 7:43 left. Devonte Bandoo scored seven of his 12 points off the bench during the spurt, which came after Iowa State coach Steve Prohm was assessed a technical foul.

“We had played a good game,” Prohm said. “I blame myself for the technical. I told the guys that. But we’ve got to be, after that, I thought they revved it up a level. We need to rev it up a level.”

Baylor has won 10 of its past 13 games against the Cyclones and went undefeated in January for the first time since 1948.

Baylor: The Bears established themselves on the glass early and outrebounded Iowa State 39-28 — including 14-8 on the offensive boards. They also outscored Iowa State 44-22 in the paint and routinely beat the Cyclones for 50-50 balls while allowing just two fast-break points.

Iowa State: The Cyclones stayed in the game in the first half behind four 3-pointers from Bolton and a 6-0 personal run from Haliburton. But Iowa State struggled to take care of the ball. Bolton and Haliburton had five turnovers apiece.

Bandoo continued his recent hot streak from 3-point range. He drilled his first attempt to put the Bears up 25-18 and hit 2 of 4 overall. He’s 10 for 16 from beyond the arc in the past four games and has scored in double digits in three of the past four games.

“Vital was chasing balls all over the place,” Prohm said. “He’s just a kid who plays hard. He’s a tough dude.”

Iowa State: At Texas on Saturday.