Gonzaga junior Kispert to make self available for NBA draft 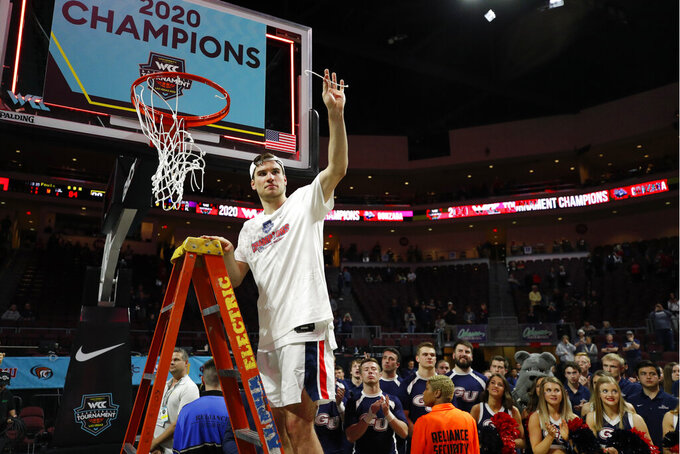 Gonzaga's Corey Kispert (24) holds up a pice of the net after defeating Saint Mary's in an NCAA college basketball game in the final of the West Coast Conference men's tournament Tuesday, March 10, 2020, in Las Vegas. (AP Photo/John Locher)

SPOKANE, Wash. (AP) — Gonzaga basketball player Corey Kispert has entered his name in the NBA draft, but left open the possibility of returning for his senior season.

Kispert announced Thursday on Twitter that he doesn't plan on hiring an agent, which would allow him to still play for the Bulldogs.

“”It’s always been my dream to play in the NBA and going without an agent allows me to see where I stand,'' Kispert wrote. “”If the evaluations tell me I need to elevate my game further, I would be thrilled to return to Gonzaga and play for Zag Nation.”

Kispert was a finalist for the Julius Erving small forward of the year award. He averaged 13.9 points per game last season and led the team with 78 3-pointers, while shooting 43.8% from long range.

The Zags were 31-2 last season and are ranked first in some preseason polls.