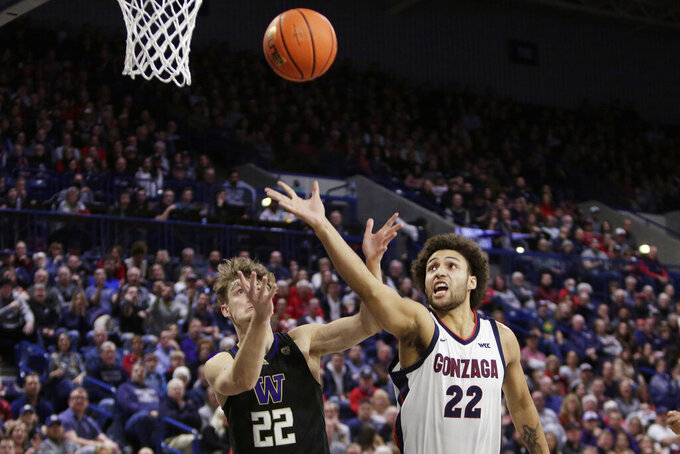 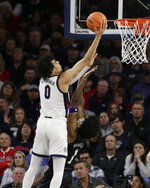 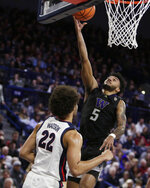 SPOKANE, Wash. (AP) — For the most part, Gonzaga has passed on a nonconference schedule that includes a significant number of its Pacific Northwest rivals with one exception.

And in its recent history, the matchup with Washington has been completely one-sided toward the Bulldogs, including Friday night.

Drew Timme scored 22 points, Julian Strawther added 18 points and 12 rebounds, and No. 18 Gonzaga pulled away in the second half to beat Washington 77-60.

Facing off for the first time since 2019 with games canceled due to the COVID-19 pandemic, the Bulldogs (7-3) won their seventh straight over the Huskies. Dating to 1998, Gonzaga has won 14 of the last 15 games in the series.

“Every game that we play against each other, it’s just been super competitive,” Gonzaga's Anton Watson said. “I'm happy we got the W.”

How competitive the Huskies have been facing off against the Bulldogs is open to debate. During Gonzaga's seven-game winning streak, only twice has the game been decided by 10 points or less.

“I think if you look for the rest of the country they've been up here and everybody else has been down here. They've created that and that's why their one of the best teams in the country and that's what you're trying to be,” Washington coach Mike Hopkins said.

Gonzaga extended the nation’s longest home winning streak to 70 games, the longest since Arizona won 71 straight at home from 1987-92. The Bulldogs will have a chance to match that mark next Monday against Northern Illinois.

Timme was dominant on the interior, taking advantage of foul trouble for the Washington front court. Timme made 8 of 13 shots and Gonzaga held a 44-32 advantage on points in the paint. Strawther found himself scoring in the lane several times, but also hit a pair of 3-pointers that sparked a second-half surge for the Bulldogs.

Gonzaga started the game missing nine of its first 10 shots, but ended up shooting 52% for the game.

“I thought once we settled down against their zone, we were able to kind of get some shots on our terms,” said Gonzaga coach Mark Few, who had little voice left afterward. “And then I thought all night we did a really, really good job of defending.”

Keion Brooks Jr. led Washington (7-3) with 14 points but was hampered by major foul trouble. Brooks picked up three first-half fouls and was whistled for his fourth with 14 minutes remaining.

"They’re a great offensive team and they go through those scoring spurts,” Hopkins said. “We talked a lot about poise … we felt like when we had a lead we turned it over a little too much and were too careless with the ball. On the road, you can’t do that.”

Gonzaga led by 10 at halftime, but the lead was 42-35 after Braxton Meah’s dunk with 16:15 left. Gonzaga scored 15 of the next 19 points to build the lead to 18. Strawther started the run with both of his 3-pointers and Timme score the final five points. Washington never pulled closer than 12 the rest of the way.

“We know that when they make runs they make big runs and we’ve just got to stay poised, but they did a hell of a job to keep making runs,” Fuller said.

Washington: The Huskies lost their 11th straight game against teams ranked in the AP Top 25, a clear issue that Hopkins has not been able to solve. Hopkins was 4-4 in his first eight games against ranked foes after arriving at Washington.

Gonzaga: Free throw shooting continues to be an issue for the Bulldogs. Gonzaga was 14 of 21 (67%) at the line. They entered the game at 71% at the line.