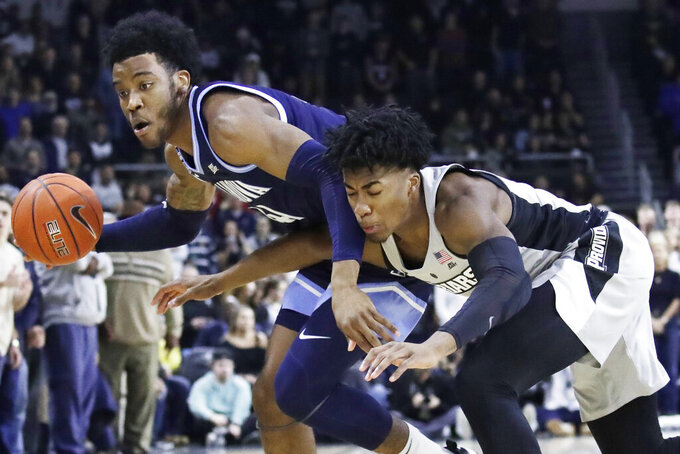 PROVIDENCE, T (AP) — Providence was dominating Villanova on the offensive boards all game, until Collin Gillespie came up with the biggest rebound of the day.

The Wildcats point guard grabbed a rebound of a potential game-tying 3-pointer, turned up the court and bounce-passed it to Jeremiah Robinson-Earl for a dunk that turned back the Friars' last rally and helped No. 9 Villanova to a 64-60 win on Saturday.

The slam was Villanova's only basket in the final 6:45 of the game.

“That's the Big East this year,” Wildcats coach Jay Wright said. “That's what every game has been like for us.”

Gillespie, who also hit a pair of free throws with 28 seconds to play, scored 18 with eight rebounds for the Wildcats (16-3, 6-1 Big East). Robinson-Earl finished with 17 points, making one of two foul shots with 13 seconds left to keep it a two-possession game.

Villanova won its sixth in a row despite giving up 16 offensive rebounds while grabbing just two. That led to 19 second-chance points for PC (11-10, 4-4) compared to four for the Wildcats.

“We knew they all go to the offensive boards. That was one of the things we struggled with,” Robinson-Earl said. “They just brought a street fight to the game.”

Nate Watson scored 18 points with nine rebounds and David Duke had 11 and 10 for Providence. The Friars have lost four of their last five games — with all of the losses coming against ranked teams.

“We had opportunity after opportunity under the 4-minutes timeout. We just couldn't capitalize,” Providence coach Ed Cooley said. “The game was right there to be had.”

Villanova led 48-38 with about 12 minutes left when Providence held the Wildcats scoreless for almost four minutes to make its biggest charge.

After Maliek White missed a pair of free throws, Luwane Pipkins sank five in a row and Watson made a tip-in to give the Friars a 52-51 lead — their first advantage since the opening minutes.

But Gillespie hit a 3-pointer, then Robinson-Earl made back-to-back buckets to make it 55-50 with 6:45 left.

Providence cut it to 59-56 in the final minutes and had four possessions with a chance to tie it. Instead, Gillespie grabbed the rebound of Pipkins' missed 3 and sent it ahead to Robinson-Earl for the dunk.

Villanova: The Wildcats felt at home on the road after playing four straight home games since visiting Marquette on Jan. 7.

Providence: The Friars played three straight games against ranked opponents and lost them all. Next up is No. 13 Butler, which won 70-58 in Providence on Jan. 10.

CLASS OF THE GLASS

Wright praised Robinson-Earl, a freshman who finished with just three rebounds, for keeping the rebounding edge from getting any worse.

“He was keeping some of them off the offensive glass,” the coach said. “He anchors our defense. When you have a freshman doing that, that's really unique.”

Saddiq Bey had nine rebounds for the Wildcats.

“It's back-to-back games where we're having a tough time making open, uncontested shots,” Cooley said. “It's frustrating to see because in practice they're going down.”

Villanova: At St. John's on Tuesday

Providence: At No. 13 Butler on Saturday.