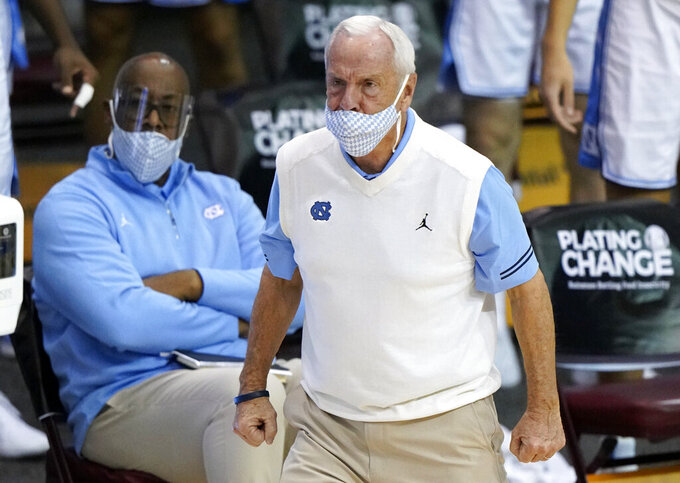 FILE - In this Dec. 2, 2020, file photo, North Carolina head coach Roy Williams directs his team in the second half of an NCAA college basketball game for the championship of the Maui Invitational in Asheville, N.C. Williams' Tar Heels visit rival Duke on Saturday, Feb. 6, 2021, with it marking the first meeting with both teams unranked since 1960. (AP Photo/Kathy Kmonicek, File)

North Carolina’s players apologized Tuesday for not following school and athletics department COVID-19 guidelines during a celebratory gathering after a win at rival Duke.

“Our intention was to celebrate privately within our group,” the players and managers said in a staetment released by the school. “Unfortunately, we allowed several friends who are not members of the team to join the gathering. We were inside and not wearing masks, which were mistakes.”

The statement was released a day after North Carolina's home game against Miami was postponed about two hours before tipoff. That had followed the emergence of social media video, first reported by The Daily Tar Heel, showing players Armando Bacot and Day’Ron Sharpe mingling with multiple other people celebrating Saturday night’s win and no one wearing a mask.

The statement notes “a number” of players and managers attended and “not just the ones shown on the video.” It includes an apology to coach Roy Williams and the coaching staff “for not stepping forward when he first addressed it with us on Sunday.”

Williams said Tuesday he appreciated the apology and that the team had previously “been fantastic” in dealing with coronavirus protocols.

“But they realize they did make a mistake, for which they are paying a very significant price,” Williams said.

The Atlantic Coast Conference said the postponement came after the schools “mutually concluded the game could not move forward," and didn't offer a reschedule date. In a later interview with The Miami Herald, Hurricanes coach Jim Larranaga referenced the video as a concern and said the team didn't "want to put ourselves in position” for potential exposure.

The Tar Heels (12-6, 7-4 ACC), who have won seven of nine, are scheduled to visit ninth-ranked Virginia on Saturday.

“We have worked too hard for eight months doing the right things to make those kinds of mistakes at this point in the season,” the players and managers said. “We are hopeful we will be able to play again soon and wish to remind everyone to stay safe so this pandemic will be over as soon as possible.”