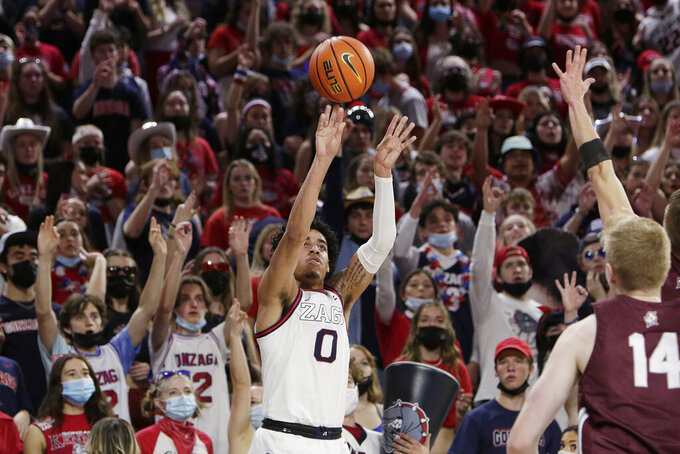 SPOKANE, Wash. (AP) — Top-ranked Gonzaga was a scoring machine in its 92-59 win over Bellarmine on Friday night, but coach Mark Few was most impressed by his team's defense.

Gonzaga held Bellarmine to 40% shooting, including just 3 of 25 from 3-point range, and forced 18 turnovers.

“I was really, really happy with our effort,” Few said, noting it was perhaps the first game this season when the Zags produced two halves of good defense. “That's not an easy team to chase around and guard.”

“Those were probably our best defensive numbers of the year,” Few added.

Drew Timme scored 25 points as Gonzaga extended the nation’s longest home winning streak to 55 games. Julian Strawther added 19 points for Gonzaga (4-0), which has not lost at home since 2018.

Dylan Penn scored 14 points, all in the first half, for Bellarmine (0-4), a member of the Atlantic Sun Conference in its second season of Division I basketball.

Freshman center Chet Holmgren had 18 points on 8-of-10 shooting for Gonzaga, plus five rebounds and five assists. Perhaps most impressive were his seven dunks.

“It's nice to get point-blankers,” Few said.

But the 7-foot Holmgren also contributed on defense, with Few having him guard Penn in the second half.

Bellarmine took an early 8-5 lead, but Gonzaga replied with a 15-3 run that included three 3-pointers by Strawther to take a 20-11 lead. Gonzaga poured it on and an alley-oop dunk by Holmgren lifted the Bulldogs to a 34-17 lead.

Holmgren's second alley-oop of the game lifted Gonzaga to a 62-37 lead early in the second half, and the Knights seemed to fall apart after that.

“Early on, we really competed,” Bellarmine coach Scott Davenport said. “Physically they wore us down with their strength and size. Gonzaga is a great team.”

But Davenport was glad to play the game.

“You couldn't simulate this game and environment,” he said. “It's a very good learning environment.”

The Zags will likely remain No. 1 for a 20th consecutive week.

Bellarmine only made three 3s, including only one of 13 attempts in the second half, when they were limited to 22 points. The Zags, on the other hand, sunk 11 of 23 3-pointers — Strawther had four.

“The best stat of the night was holding them to three 3's,” Few said.

Gonzaga had a height advantage and used it to score 42 points in the paint vs. 32 in the paint for the Knights.

Bellarmine: Nobody said Division I is easy. The Knights lost at No. 6 Purdue in the season opener, and their next game is against No. 2 UCLA. ... Bellarmine, based in Louisville, Kentucky, was third in the nation last year in field-goal percentage at 50.8%, but is shooting only 44% this season with most of the same players.

Gonzaga: The Zags concluded a four-game home stand by pounding an undersized foe. ... Timme was named the West Coast Conference player of the week on Monday, while Holmgren was the conference freshman of the week ... Gonzaga has achieved a No. 1 ranking in six of the past 10 seasons. ... Gonzaga is 240-15 in the McCarthey Athletic Center since it opened in 2004.

Bellarmine: Faces No. 2 UCLA at the Empire Classic in Las Vegas on Monday.

Gonzaga: Heads to Las Vegas to take on Central Michigan (Monday), No. 2 UCLA (Wednesday) and No. 7 Duke (Nov. 27). “You've got to play really, really good teams,” Few said. “It's important for college basketball ... our guys are looking forward to it.”