What's an NCAA Tournament unit worth? Millions. Here's how 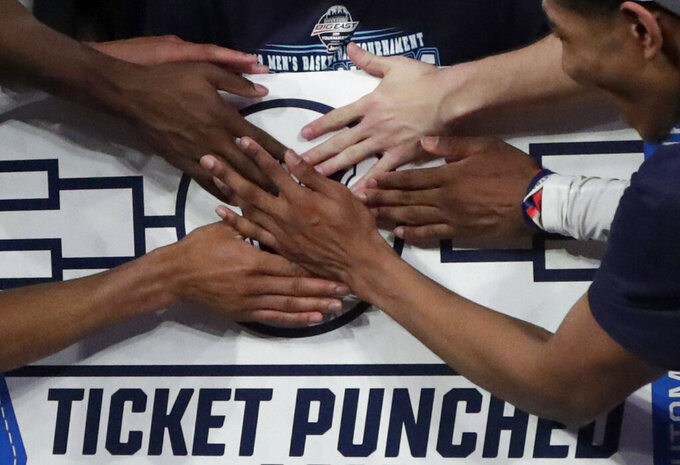 Villanova players stick a logo of their team on a bracket board after defeating Seton Hall 74-72 in an NCAA college basketball game in the championship of the Big East Conference tournament, Saturday, March 16, 2019, in New York. (AP Photo/Julio Cortez)

The upstart run for Loyola Chicago making the Final Four last year delivered more than just excitement for fans of Sister Jean and the Ramblers.

Loyola's run will be worth at least $8.45 million to the Missouri Valley Conference over the next six years.

It's payable to the league from the NCAA, through a complex system of payouts funded largely by the lucrative deal for CBS and Turner Sports to televise March Madness.

The system puts an exact price tag on bids and wins leading up to the Final Four. And once conferences are paid, they distribute money back to their member schools.

"Units" are what the NCAA calls its tally of wins, automatic qualifiers and at-large bids that determine how much conferences are paid.

Each distribution year is assigned a value for a single unit, which is then applied to units earned by conferences over the previous six tournaments.

HOW TO WIN UNITS

The units come from two funds. The Equal Conference Fund is a baseline through which the NCAA awards one unit to each of the 32 Division I conferences that have an automatic bid. Through the Performance Fund, the NCAA also awards a single unit to every team that makes the tournament via an at-large berth.

There are 68 teams that make the tournament; each accounts for one unit just for getting in.

Units are also awarded from the performance fund for teams that advance. One unit is awarded for every win until teams reach the Final Four. Wins in the semifinals or final don't count for units.

Payments are made each April to conferences. Most conferences share the money equally among members — the NCAA's recommendation — though conferences ultimately decide for themselves how to split the earnings. In some leagues, the school that earned the unit will get a bonus. Also, many smaller leagues share the revenue by funding the conference office or league-wide initiatives.

The schools mostly re-invest in athletics, from scholarships for athletes in all sports — though not salaries — to coaching salaries, training facilities, stadiums, ballparks and arenas.

From 1997 through 2018, the Big Ten Conference has been paid the most at $340.4 million, while the Southwestern Athletic Conference has earned $25 million, nearly the minimum it can earn given that all leagues make money from their teams that qualify automatically.

Here's a look at how much some of the most surprising mid-major Final Four runs have been worth to their conferences:

— VCU, 2011: The Rams earned six units for the Colonial Athletic Association, going from the First Four to the Final Four, worth $9.12 million. VCU and George Mason move to the Atlantic 10 Conference in 2012.

— Butler, 2011: The Bulldogs earned five units for the Horizon League, worth $7.6 million. The Horizon League has not earned more than one unit in the tournament since 2011.

— Wichita State, 2013: The Shockers earned five units for the Missouri Valley Conference worth $7.9 million. Wichita State moved to the American Athletic Conference in 2018.

Here's a look at how much each of college basketball's biggest conferences have been paid from 1997 to 2018:

The figures reflect the split of the Big East, which was picked apart during realignment and reconfigured from 16 teams to 10.

Simple — we did the math.

More specifically, The Associated Press analyzed more than $3 billion in payments distributed from 1997 through 2018. The current system began in 1991 and the NCAA provided the AP with unit values dating back to 1997, the earliest year for which it had reliable data.

The AP calculated NCAA distributions, confirming figures since 2008 with detailed units and payouts provided by the NCAA, and applied unit values to tournament results from earlier years.

The AP also used formulas where provided by conferences to estimate how money was shared by schools, before expenses.